In order to understand things properly and to remember them for a long time, human beings prefer to keep information in bunches or categories, the same type of information goes in one category, this way, information looks neater and becomes easier to remember. Sets are also defined in the same way. In order to keep elements belonging to the same category, they are kept in one set, this way in mathematics, data can be neatly arranged as well. However, sets do not allow the mentioning of the qualities of elements. For Instance, all the girls in class 8 can be put in one set but all the pretty girls in class 8 can not be considered an example of a set. Let’s learn about sets in more detail.

Sets are defined as the well-defined collection of data. The data present in the set is known as an element, each element belonging to one set are different from the other but the category they belong to is always the same, for instance, a bag of different types of fruits, all-natural numbers, etc.

If a Set has all its elements belonging to other sets, this set will be known as a subset of the other set. A Subset is denoted as “⊆ “. If set A is a subset of set B, it is represented as A⊆ B.

Example of a Subset,

If set A has all its elements present in set B and set B has more number of elements then set A is a proper set of set B. The proper set is represented as ‘⊂’

Two sets having an equal number of elements can never be proper sets of each other, hence, a set is never a proper set of itself.

Note: All Proper sets are Subsets, but all Subsets can not be considered as Proper sets.

Power Set is defined as the set of all the possible subsets of the given set. The definition seems a little confusing but in real, Power sets are very easily understood. Imagine a set with some elements present in them, now write all the possible subsets that can be written for the particular set, treat the subsets as elements as place them in a separate set, this set obtained will be called as a Power set.

Example of a Power set,

Assume set A and set B are parts of the universal sets,

This should look something like this on the Venn diagram, 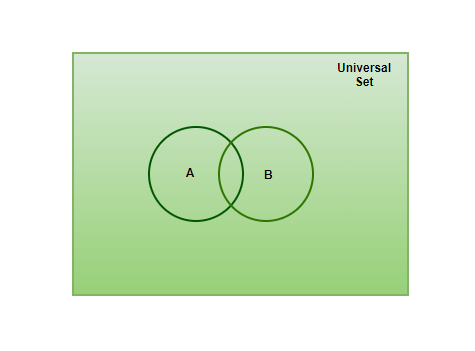 Question 1: State if the following statements are True or False,

Question 2: Explain which of the following sets are the subsets of Set P,

Question 3: What type of elements can not be put in a Set?

Question 4: What is the difference between a Subset and a Proper set?

If a set A has all its elements present in set B, then it can be said that set A ⊆ set B, one important thing to notice is that both sets can be equal and still be subsets of each other.

There are 3 elements in the set P, therefore, it will have 23 elements present in its Powerset. It can also be said that there are 8 subsets possible for set P.

Question 6: Represent the information given below in Venn diagram,

The sets A and B have all its elements present in U, hence, U is clearly the universal set of set A and B.

Set A and set B has 5 as a common element between the, based on this information, Venn diagram can be easily drawn 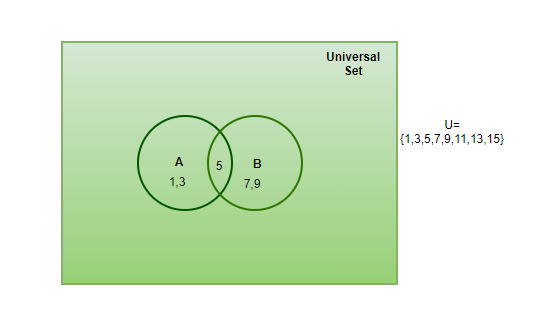