A histogram is a graphical representation of the distribution of data given by the user. Its appearance is similar to Bar-Graph except it is continuous.

The towers or bars of a histogram are called bins. The height of each bin shows how many values from that data fall into that range.

The default value of the number of bins to be created in a histogram is 10. However, we can change the size of bins using the parameter bins in matplotlib.pyplot.hist().

We can pass an integer in bins stating how many bins/towers to be created in the histogram and the width of each bin is then changed accordingly. 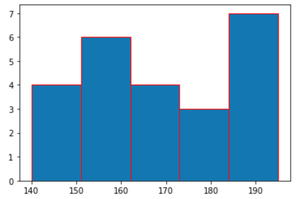 Here, the bins = 5, i.e the number of bins to be created is 5. Setting bins to an integer creates bins of equal size or width. As the bin size is changed so then the bin width would be changed accordingly as : 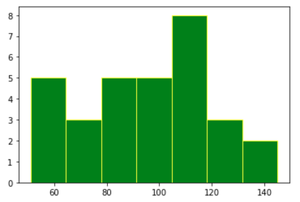 In the above graph, the width of each bin is :

We can also pass a sequence of int or float in the parameter bins. In which the elements of the sequence are the edges/boundaries of the bins. In this method, the bin width may vary for each bin.

Hence, all the bins are half-open [a, b) but the last bin is closed [a, b]. For such cases, the width of each bin is equal.

If the difference between each element of the sequence assigned to bins is not equal then the width of each bin is different, hence the bin width depends on the sequence. 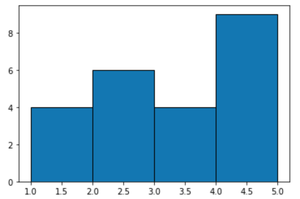 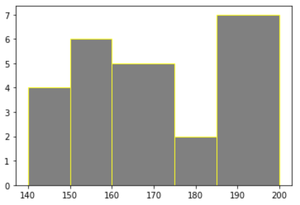 As the step is fixed in range(), we get equally sized bins in the histogram. 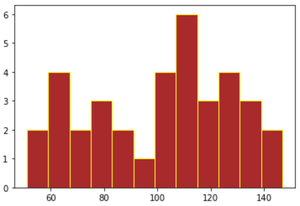