Limits give us the power to approximate functions and see the values they are approaching. Limit is not the value of the function at a particular point. It is the value which the function is approaching as one moves towards the given point. There are many ways to solve the limits, often limits are easy to solve, but sometimes they evaluate into indeterminate forms which are not defined and are difficult to estimate. The goal is to avoid these forms and solve the limits of the function. Let’s look at some algebraic ways to solve such limits.

A limit is a value the function or a sequence approaches as the input or the index approaches some value. These concepts are essential in calculus and real analysis as they help us define continuity, differentiability, and integrals. In the formula, the limit for a function f(x) at a point x = c is usually denoted as,

Often only the substitution method is enough for calculating the limit. But sometimes some limits might evaluate to indeterminate forms.

An indeterminate form is usually encountered where the limit involves more than one function. It is defined as an expression involving two or more whose limit cannot be determined solely from the individual functions.

The most common indeterminate forms are generated from the limits of ratio of functions,

, when both functions evaluate either to 0 or ∞ generating the limits of the form

Certain algebraic methods can help us avoid these forms.

These techniques from algebra can help in avoiding the indeterminate forms in the limits. Some of these forms include evaluating limits by factoring and sometimes rationalizing. In the case of trigonometric functions, some other tricks such as using the Pythagorean identity or trigonometric limit using double angle identity can help us solve these limits.

In such cases, we factorize both the polynomials such that the common factor cancels out.

In this method, indeterminate form is dealt with by rationalizing the function.

Notice that this generates the indeterminate form of ∞ – ∞.

In such cases, we rationalize the expression.

These identities can be used to substitute in the functions when trigonometric functions show indeterminate forms.

Following double angle identities can also be used for substitution in trigonometric functions:

Question 1: Find out the following limit.

This limit is of the 0/0 form. Factorization can be used here.

Question 2: Find out the following limit.

This limit is of the 0/0 form. Factorization can be used here.

Question 3: Find out the following limit.

This limit is of the indeterminate form. Rationalization can be used here. 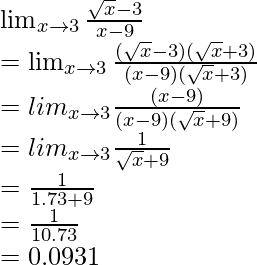 Question 4: Find out the limit of,

Putting the limit x tends to 2 to see the value obtained,

As, it is clear that the answer is undefined, rationalize the denominator, 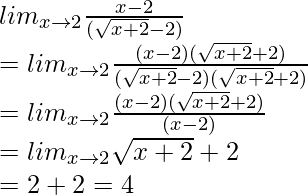