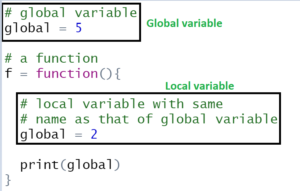 Previous
R - Variables
Next
Dynamic Scoping in R Programming
Related Articles
1. Count the frequency of a variable per column in R Dataframe
2. Rank variable by group using Dplyr package in R
3. How to Assign Colors to Categorical Variable in ggplot2 Plot in R ?
4. Variable importance plot using random forest package in R
5. How to sum a variable by group in R?
6. Dplyr - Groupby on multiple columns using variable names in R
7. Convert Character String to Variable Name in R
8. Create Lagged Variable by Group in R DataFrame
9. Split DataFrame Variable into Multiple Columns in R
10. Multiple Density Plots and Coloring by Variable with ggplot2 in R
Article Contributed By :