The package is an appropriate way to organize the work and share it with others. Typically, a package will include code (not only R code!), documentation for the package and the functions inside, some tests to check everything works as it should, and data sets. Packages in R language are a set of R functions, compiled code, and sample data. These are stored under a directory called “library” within the R environment. By default, R installs a group of packages during installation. Once we start the R console, only the default packages are available by default. Other packages that are already installed need to be loaded explicitly to be utilized by the R program that’s getting to use them. 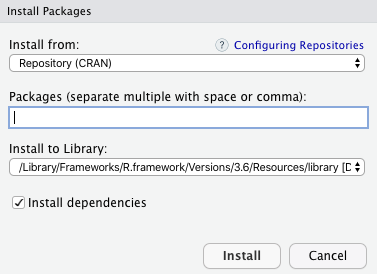 How to Load Packages

When a package is installed, we are ready to use its functionalities. If we just need a sporadic use of a few functions or data inside a package we can access them with the following notation

There is always a confusion between a package and a library, and we find people calling libraries as packages.

The traditional way of discovering packages is just by learning R, in many tutorials and courses the most popular packages are usually mentioned and used. The first alternative can be to browse categories of CRAN packages. CRAN is the official repository, also gives us the option to browse through packages.
Another alternative to finding packages can be R Documentation, a help documentation aggregator for R packages from CRAN, BioConductor, and GitHub, which offers you a search box ready for your requests directly on the main page.