In data mining and statistics, hierarchical clustering analysis is a method of cluster analysis that seeks to build a hierarchy of clusters i.e. tree-type structure based on the hierarchy.

Basically, there are two types of hierarchical cluster analysis strategies –

1. Agglomerative Clustering: Also known as bottom-up approach or hierarchical agglomerative clustering (HAC). A structure that is more informative than the unstructured set of clusters returned by flat clustering. This clustering algorithm does not require us to prespecify the number of clusters. Bottom-up algorithms treat each data as a singleton cluster at the outset and then successively agglomerates pairs of clusters until all clusters have been merged into a single cluster that contains all data. 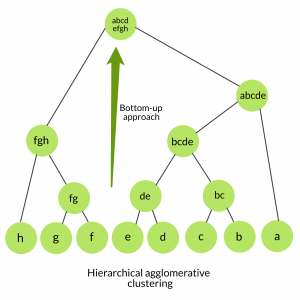 Python implementation of the above algorithm using the scikit-learn library:

Computing Distance Matrix: While merging two clusters we check the distance between two every pair of clusters and merge the pair with least distance/most similarity. But the question is how is that distance determined. There are different ways of defining Inter Cluster distance/similarity. Some of them are:

1. Min Distance: Find minimum distance between any two points of the cluster.

2. Max Distance: Find maximum distance between any two points of the cluster.

3. Group Average: Find average of distance between every two points of the clusters.

4. Ward’s Method: Similarity of two clusters is based on the increase in squared error when two clusters are merged.

For example, if we group a given data using different method, we may get different results: 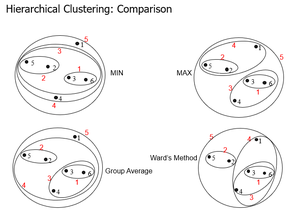 2. Divisive clustering: Also known as a top-down approach. This algorithm also does not require to prespecify the number of clusters. Top-down clustering requires a method for splitting a cluster that contains the whole data and proceeds by splitting clusters recursively until individual data have been split into singleton clusters. 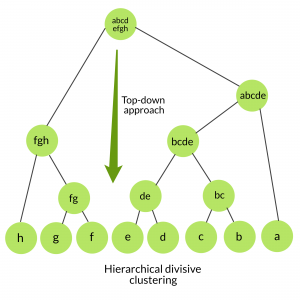