ImageNet Large Scale Visual Recognition Challenge (ILSVRC) is an annual computer vision competition. Each year, teams compete on two tasks. The first is to detect objects within an image coming from 200 classes, which is called object localization. The second is to classify images, each labeled with one of 1000 categories, which is called image classification. VGG 16 was proposed by Karen Simonyan and Andrew Zisserman of the Visual Geometry Group Lab of Oxford University in 2014 in the paper “VERY DEEP CONVOLUTIONAL NETWORKS FOR LARGE-SCALE IMAGE RECOGNITION”. This model won 1st  and 2nd place in the above categories in the 2014 ILSVRC challenge.

To make sure these probabilities add to 1, we use softmax function.

This softmax function is defined as follows:

After this we take the 5 most probable candidates into the vector.

and our ground truth vector is defined as follows:

Then we define our Error function as follows:

After the stack of convolution and max-pooling layer, we got a (7, 7, 512) feature map. We flatten this output to make it a (1, 25088) feature vector. After this there is 3 fully connected layer, the first layer takes input from the last feature vector and outputs a (1, 4096) vector, the second layer also outputs a vector of size (1, 4096) but the third layer output a 1000 channels for 1000 classes of ILSVRC challenge i.e. 3rd fully connected layer is used to implement softmax function to classify 1000 classes. All the hidden layers use ReLU as its activation function. ReLU is more computationally efficient because it results in faster learning and it also decreases the likelihood of vanishing gradient problems.

Configuration: The table below listed different VGG architectures. We can see that there are 2 versions of VGG-16 (C and D). There is not much difference between them except for one that except for some convolution layers, (3, 3) filter size convolution is used instead of (1, 1). These two contain 134 million and 138 million parameters respectively. 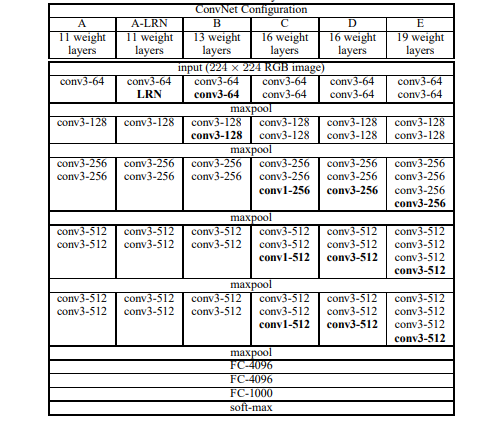 Object Localization In Image: To perform localization, we need to replace the class score by bounding box location coordinates. A bounding box location is represented by the 4-D vector (center coordinates(x,y), height, width). There are two versions of localization architecture, one is bounding box is shared among different candidates (the output is 4 parameter vector) and the other is a bounding box is class-specific (the output is 4000 parameter vector). The paper experimented with both approaches on VGG -16 (D) architecture. Here we also need to change loss from classification loss to regression loss functions (such as MSE) that penalize the deviation of predicted loss from the ground truth.