R-CNN: R-CNN was proposed by Ross Girshick et al. in 2014 to deal with the problem of efficient object localization in object detection. The previous methods use what is called Exhaustive Search which uses sliding windows of different scales on image to propose region proposals Instead, this paper uses the Selective search algorithm which takes advantage of segmentation of objects and Exhaustive search to efficiently determine the region proposals. This selective search algorithm proposes approximately 2000 region proposals per image. These are then passed to the CNN model (Here AlexNet is used).

This CNN model then outputs a (1, 4096) feature vector from each region proposal. This vector then passed into the SVM model for classification of object and bounding box regressor for localization. Problem with R-CNN:

Faster R-CNN: Faster R-CNN was introduced in 2015 by k He et al. After the Fast R-CNN, the bottleneck of the architecture is selective search. Since it needs to generate 2000 proposals per image. It constitutes a major part of the training time of the whole architecture. In Faster R-CNN, it was replaced by the region proposal network. First of all, in this network, we passed the image into the backbone network. This backbone network generates a convolution feature map. These feature maps are then passed into the region proposal network. The region proposal network takes a feature map and generates the anchors (the centre of the sliding window with a unique size and scale). These anchors are then passed into the classification layer (which classifies that there is an object or not) and the regression layer (which localize the bounding box associated with an object). 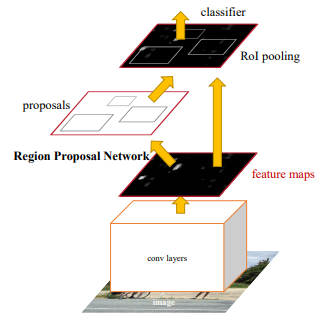 The above Detection time results are from the research paper. They can vary depending upon the machine configurations. References: