Artificial Neural Networks and its Applications

As you read this article, which organ in your body is thinking about it? Its the brain of course! But do you know how the brain works? Well, it has neurons or nerve cells that are the primary units of both the brain and the nerve system. These neurons receive sensory input from the outside world which they process and then provide the output which might act as the input to the next neuron. 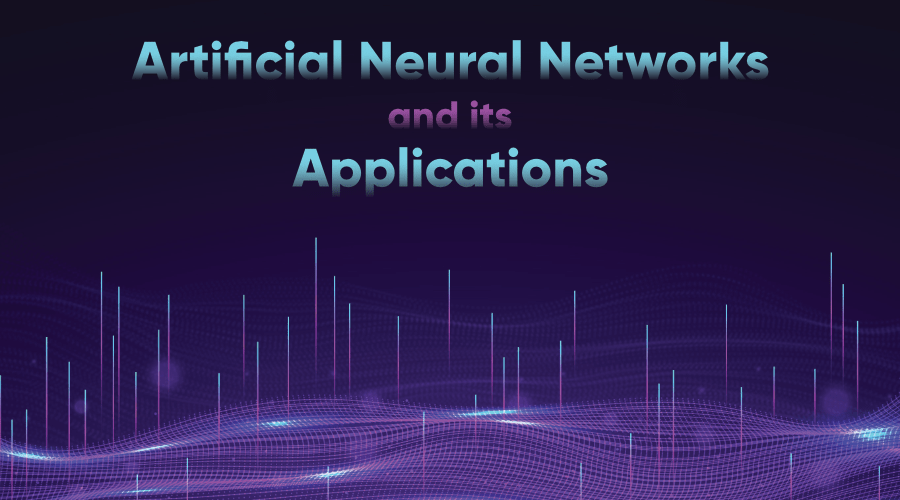 What are Artificial Neural Networks?

In the majority of neural networks, units are interconnected from one layer to another. Each of these connections has weights that determine the influence of one unit on another unit. As the data transfers from one unit to another, the neural network learns more and more about the data which eventually results in an output from the output layer.

How do Artificial Neural Networks learn?

Artificial neural networks are trained using a training set. For example, suppose you want to teach an ANN to recognize a cat. Then it is shown thousands of different images of cats so that the network can learn to identify a cat. Once the neural network has been trained enough using images of cats, then you need to check if it can identify cat images correctly. This is done by making the ANN classify the images it is provided by deciding whether they are cat images or not. The output obtained by the ANN is corroborated by a human-provided description of whether the image is a cat image or not. If the ANN identifies incorrectly then back-propagation is used to adjust whatever it has learned during training. Back-propagation is done by fine-tuning the weights of the connections in ANN units based on the error rate obtained. This process continues until the artificial neural network can correctly recognize a cat in an image with minimal possible error rates.

What are the types of Artificial Neural Networks?

The Recurrent Neural Network saves the output of a layer and feeds this output back to the input to better predict the outcome of the layer. The first layer in the RNN is quite similar to the feed-forward neural network and the recurrent neural network starts once the output of the first layer is computed. After this layer, each unit will remember some information from the previous step so that it can act as a memory cell in performing computations.

A Convolutional neural network has some similarities to the feed-forward neural network, where the connections between units have weights that determine the influence of one unit on another unit. But a CNN has one or more than one convolutional layers that use a convolution operation on the input and then pass the result obtained in the form of output to the next layer. CNN has applications in speech and image processing which is particularly useful in computer vision.

Artificial Neural Networks are used heavily in Social Media. For example, let’s take the ‘People you may know’ feature on Facebook that suggests you people that you might know in real life so that you can send them friend requests. Well, this magical effect is achieved by using Artificial Neural Networks that analyze your profile, your interests, your current friends, and also their friends and various other factors to calculate the people you might potentially know. Another common application of Machine Learning in social media is facial recognition. This is done by finding around 100 reference points on the person’s face and then matching them with those already available in the database using convolutional neural networks.

When you log onto E-commerce sites like Amazon and Flipkart, they will recommend your products to buy based on your previous browsing history. Similarly, suppose you love Pasta, then Zomato, Swiggy, etc. will show you restaurant recommendations based on your tastes and previous order history. This is true across all new-age marketing segments like Book sites, Movie services, Hospitality sites, etc. and it is done by implementing personalized marketing. This uses Artificial Neural Networks to identify the customer likes, dislikes, previous shopping history, etc. and then tailor the marketing campaigns accordingly.

Artificial Neural Networks are used in Oncology to train algorithms that can identify cancerous tissue at the microscopic level at the same accuracy as trained physicians. Various rare diseases may manifest in physical characteristics and can be identified in their premature stages by using Facial Analysis on the patient photos. So the full-scale implementation of Artificial Neural Networks in the healthcare environment can only enhance the diagnostic abilities of medical experts and ultimately lead to the overall improvement in the quality of medical care all over the world.

I am sure you all have heard of Siri, Alexa, Cortana, etc. and also heard them based on the phones you have!!! These are personal assistants and an example of speech recognition that uses Natural Language Processing to interact with the users and formulate a response accordingly. Natural Language Processing uses artificial neural networks that are made to handle many tasks of these personal assistants such as managing the language syntax, semantics, correct speech, the conversation that is going on, etc.