Triangle is one of the basic 2-D shapes in geometry. It consists of three angles, three side and three vertices, e.g., 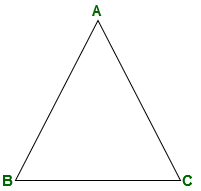 On the basis of measurement of sides and angles there different types of triangle listed below: