Introduction:
Data cleaning is one of the important parts of machine learning. It plays a significant part in building a model. It surely isn’t the fanciest part of machine learning and at the same time, there aren’t any hidden tricks or secrets to uncover. However, the success or failure of a project relies on proper data cleaning. Professional data scientists usually invest a very large portion of their time in this step because of the belief that “Better data beats fancier algorithms”.
If we have a well-cleaned dataset, there are chances that we can get achieve good results with simple algorithms also, which can prove very beneficial at times especially in terms of computation when the dataset size is large. 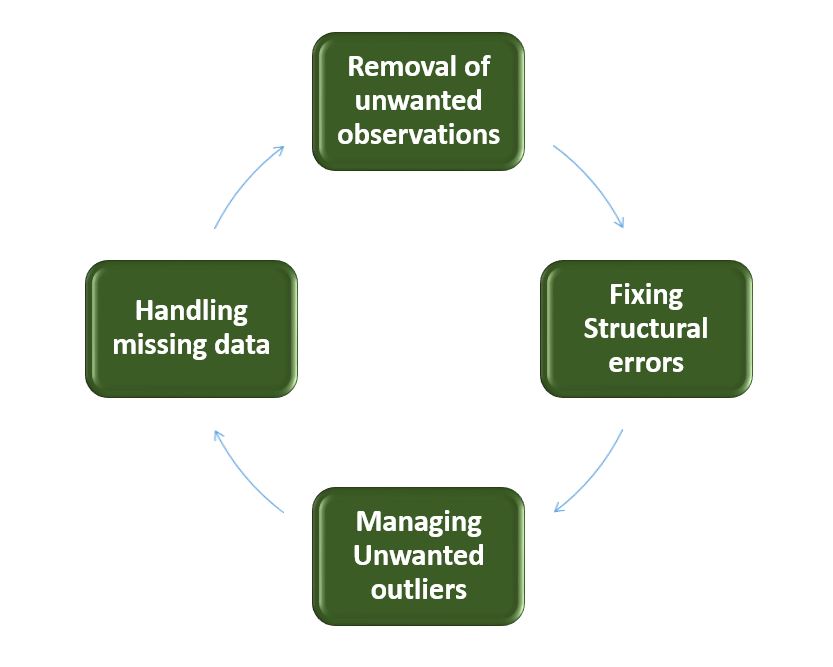 Missing data is like missing a puzzle piece. If you drop it, that’s like pretending the puzzle slot isn’t there. If you impute it, that’s like trying to squeeze in a piece from somewhere else in the puzzle.
So, missing data is always an informative and an indication of something important. And we must be aware of our algorithm of missing data by flagging it. By using this technique of flagging and filling, you are essentially allowing the algorithm to estimate the optimal constant for missingness, instead of just filling it in with the mean.

Conclusion:
So, we have discussed four different steps in data cleaning to make the data more reliable and to produce good results. After properly completing the Data Cleaning steps, we’ll have a robust dataset that avoids many of the most common pitfalls. This step should not be rushed as it proves very beneficial in the further process.