Memory in a C/C++/Java program can either be allocated on a stack or a heap.
Prerequisite: Memory layout of C program.

Heap Allocation: The memory is allocated during the execution of instructions written by programmers. Note that the name heap has nothing to do with the heap data structure. It is called a heap because it is a pile of memory space available to programmers to allocate and de-allocate. Every time when we made an object it always creates in Heap-space and the referencing information to these objects is always stored in Stack-memory. Heap memory allocation isn’t as safe as Stack memory allocation because the data stored in this space is accessible or visible to all threads. If a programmer does not handle this memory well, a memory leak can happen in the program.

Intermixed example of both kinds of memory allocation Heap and Stack in java:

Following are the conclusions on which we’ll make after analyzing the above example:

Pictorial representation as shown in Figure.1 below: 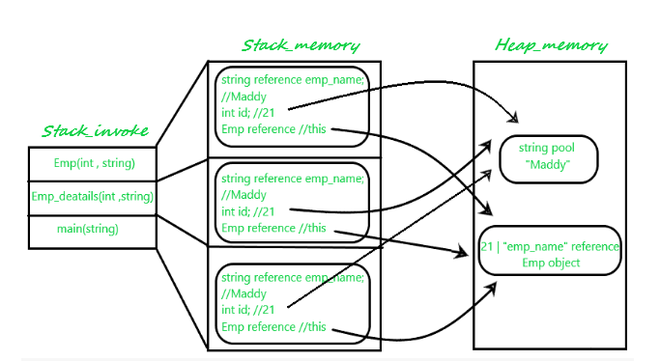