Java is one of the most popular and widely used programming languages and platforms. Java is fast, reliable, and secure. Java is used in every nook and corner from desktop to web applications, scientific supercomputers to gaming consoles, cell phones to the Internet.

Java is easy to learn, and its syntax is simple and easy to understand. It is based on C++ (so easier for programmers who know C++).

The process of Java programming can be simplified in three steps:

The below-given program is the most simple program of Java printing “Hello World” to the screen. Let us try to understand every bit of code step by step.

The “Hello World!” program consists of three primary components: the HelloWorld class definition, the main method, and source code comments. The following explanation will provide you with a basic understanding of the code:

This line uses the keyword class to declare that a new class is being defined.

It is an identifier that is the name of the class. The entire class definition, including all of its members, will be between the opening curly brace { and the closing curly brace }.

In the Java programming language, every application must contain a main method whose signature is:

Like in C/C++, the main method is the entry point for your application and will subsequently invoke all the other methods required by your program.

The next line of code is shown here. Notice that it occurs inside the main() method.

This line outputs the string “Hello, World” followed by a new line on the screen. Output is accomplished by the built-in println( ) method. The System is a predefined class that provides access to the system, and out is the variable of type output stream connected to the console.

They can either be multiline or single-line comments.

This is a single-line comment. This type of comment must begin with // as in C/C++. For multiline comments, they must begin from /* and end with */. 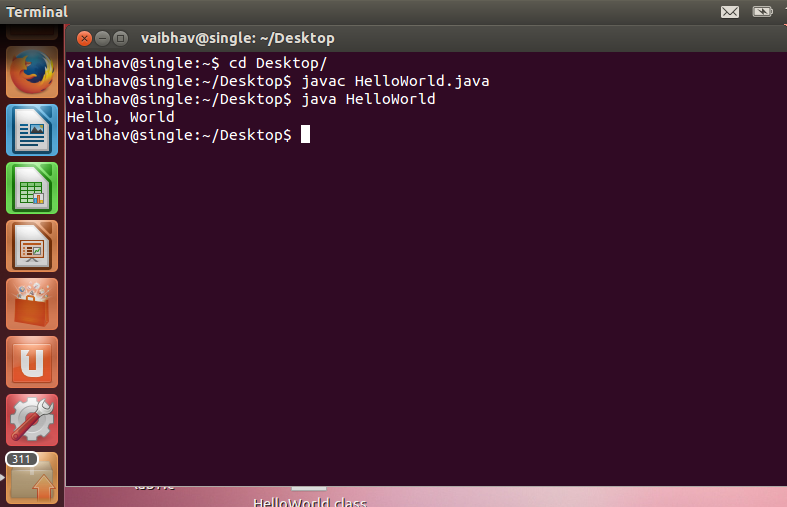