Black box testing is a type of software testing in which the functionality of the software is not known. The testing is done without the internal knowledge of the products.

Black box testing can be done in the following ways:

1. Syntax-Driven Testing – This type of testing is applied to systems that can be syntactically represented by some language. For example- compilers, language that can be represented by a context-free grammar. In this, the test cases are generated so that each grammar rule is used at least once.

2. Equivalence partitioning – It is often seen that many types of inputs work similarly so instead of giving all of them separately we can group them and test only one input of each group. The idea is to partition the input domain of the system into several equivalence classes such that each member of the class works similarly, i.e., if a test case in one class results in some error, other members of the class would also result in the same error.

3. Boundary value analysis – Boundaries are very good places for errors to occur. Hence if test cases are designed for boundary values of the input domain then the efficiency of testing improves and the probability of finding errors also increases. For example – If the valid range is 10 to 100 then test for 10,100 also apart from valid and invalid inputs.

4. Cause effect Graphing – This technique establishes a relationship between logical input called causes with corresponding actions called the effect. The causes and effects are represented using Boolean graphs. The following steps are followed:

For example, in the following cause-effect graph: 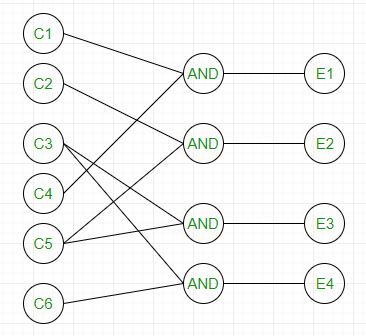 It can be converted into a decision table like: 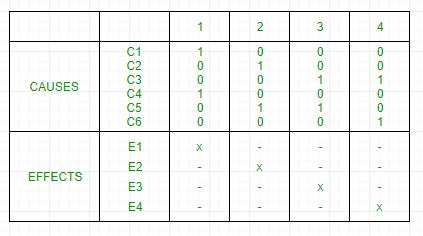 5. Requirement-based testing – It includes validating the requirements given in the SRS of a software system.

Functional Testing: It determines the system’s software functional requirements.
Regression Testing: It ensures that the newly added code is compatible with the existing code. In other words, a new software update has no impact on the functionality of the software. This is carried out after a system maintenance operation and upgrades.
Nonfunctional Testing: Nonfunctional testing is also known as NFT. This testing is not functional testing of software. It focuses on the software’s performance, usability, and scalability.