Pandas Series.combine() is a series mathematical operation method. This is used to combine two series into one. The shape of output series is same as the caller series. The elements are decided by a function passed as parameter to combine() method. The shape of both series has to be same otherwise it will throw an error.

Parameters:
other: other series or list type to be combined with caller series
func: Function passed as parameter which will decide from which series the element should be put at that index
fill_value: integer value of level in case of multi index

In this example, two lists are made and converted into pandas series using .Series() method. A function is made using lambda which checks which values is smaller in both series and returns whichever is the smaller.

Output:
As shown in the output image, the returned series is having smaller values from both series. 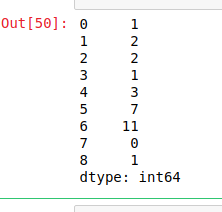 In this example, Null values are passed too using Numpy.nan method. Since series contains null values, 5 is passed to fill_value parameter to replace null values by 5. A lambda function is passed which will compare values in both series and will return the greater one.

Output:
As shown in the output, the NaN values in the series were replaced by 5 before combining the series.