Looping in programming languages is a feature that facilitates the execution of a set of instructions/functions repeatedly while some condition evaluates to true. For example, suppose we want to print “Hello World” 10 times. This can be done in two ways as shown below:

Iterative Method: The iterative method to do this is to write the document.write() statement 10 times.

Using Loops: In Loop, the statement needs to be written only once and the loop will be executed 10 times as shown below:

Many things may seem confusing to you in the above program at this point of time but do not worry you will be able to understand everything about loops in JavaScript by the end of this tutorial. You can observe that in the above program using loops we have used the document.write statement only once but still, the output of the program will be the same as that of the iterative program where we have used the document.write statement 10 times. In computer programming, a loop is a sequence of instructions that is repeated until a certain condition is reached.

There are mainly two types of loops:

JavaScript mainly provides three ways for executing the loops. While all the ways provide similar basic functionality, they differ in their syntax and condition checking time. Let us learn about each one of these in detail.

while loop: A while loop is a control flow statement that allows code to be executed repeatedly based on a given Boolean condition. The while loop can be thought of as a repeating if statement.

for loop: for loop provides a concise way of writing the loop structure. Unlike a while loop, a for statement consumes the initialization, condition, and increment/decrement in one line thereby providing a shorter, easy-to-debug structure of looping. Syntax:

do-while: The do-while loop is similar to the while loop with the only difference that it checks for the condition after executing the statements, and therefore is an example of an Exit Control Loop. 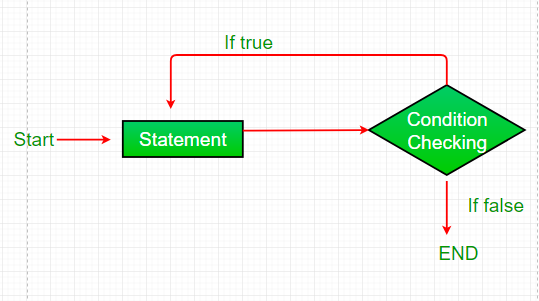 Infinite loop: One of the most common mistakes while implementing any sort of looping is that it may not ever exit, that is the loop runs for infinite times. This happens when the condition fails for some reason.

Here are some more loops used in Javascript these days:

For-in: For-in loop in JavaScript is used to iterate over the properties of an object. The for-in loop iterates only over those keys of an object which have their enumerable property set to “true”.

You can learn more about it here: https://www.geeksforgeeks.org/javascript-for-in-loop/