Global and Local variables in JavaScript

Global Variable: These are variables that are defined in global scope i.e. outside of functions. These variables have global scope, so they can be accessed by any function directly. In the case of global scope variables, the keyword they are declared with does not matter they all act the same. A variable declared without a keyword is also considered global even though it is declared in the function.

Local Variable: When you use JavaScript, local variables are variables that are defined within functions. They have local scope, which means that they can only be used within the functions that define them. Accessing them outside the function will throw an error

How to use variables:

Example 1: In this example, we will declare variables in the global scope so that they can be accessed anywhere in the program.

Explanation: We can see that the variable petName is declared in the global scope and is easily accessed inside functions. Also, the fruit was declared inside the function without any keyword so it was considered global and was accessible inside another function.

Example 2: In this example, we will declare variables in the local scope and try to access them at different scopes. 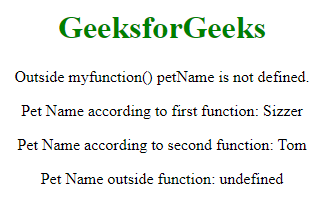 Where to use which variable:

Note: Use local variables whenever possible. Always use the var keyword to declare a new variable before the variable is referred to by other statements.