Redux is a state managing library used in JavaScript apps. It simply manages the state of your application or in other words, it is used to manage the data of the application. It is used with a library like React.
Uses: It makes easier to manage state and data. As the complexity of our application increases. At the start, it is hard to understand but it really helps to build complex applications. In starting, it feels like a lot of work, but it is really helpful.
Before we dive into Redux we should know about some important principles of redux. There are three principles of Redux these are: 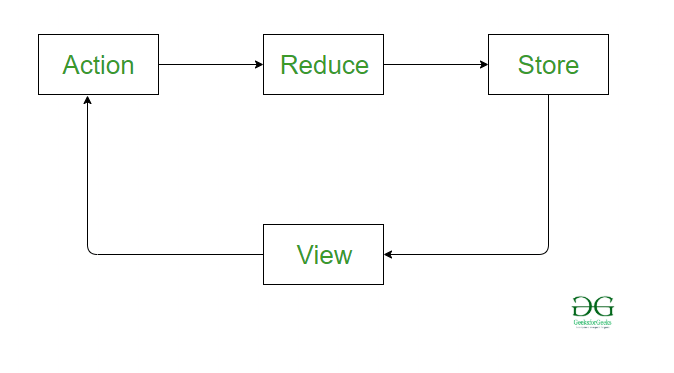 Actions: Actions are a plain JavaScript object that contains information. Actions are the only source of information for the store. Actions have a type field that tells what kind of action to perform and all other fields contain information or data. And there is one other term called Action Creators, these are the function that creates actions. So actions are the information (Objects) and action creator are functions that return these actions.
Example: The easiest example we can take try is To-do. So we will create two action creators one for adding a task in to-do and for removing.

So, the above two functions are action creators. One is for adding a task and one for removing, and see both have a type which tells what is the purpose of actions creator and they will be used with reducers.
Reducers: As we already know, actions only tell what to do, but they don’t tell how to do, so reducers are the pure functions that take the current state and action and return the new state and tell the store how to do.
Let’s create a reducer for our TO-do.
Example:

So, In the above reducer, a function created with two arguments first is the current state and next is the action we want to perform, First initialize the current state empty array because at first task list is gonna be empty.
Then check the action type, different type of actions will have different functionality, In the above case if task is added, then it returns the array containing older list of task and with one new added, but the older state are not gonna mutate the older state we gonna return new one, this is needed to be kept in mind. Same for remove, if none of the above two then just return the list. Return the new state, Never mutate the older state.
For more complex apps use combineReducers() to combine them so that it can pass to store.
Store: The store is the object which holds the state of the application.
Functions associated with Store:

Example: Let’s create a store for our TO-do.

Next
Introduction to React-Redux
Related Articles
1. Explain Reducers in Redux
2. Redux Toolkit Better way to write Redux code in ReactJS
3. Explain Action’s in Redux
4. How to handle more action using redux ?
5. What is a store in Redux ?
6. Redux Store in React Native
7. How to combine multiple reducers in ReactJS ?
8. Introduction to React-Redux
9. Redux and The Flux Architecture
10. What is Redux Toolkit and why it is more preferred?
Article Contributed By :