Byte code is a non-runnable code after it is translated by an interpreter into machine code then it is understandable by the machine. It is compiled to run on JVM, any system having JVM can run it irrespective of their operating system. That’s why Java is platform-independent. Byte code is referred to as a Portable code.

Machine code is a set of instructions that is directly machine-understandable and it is processed by the Central Processing Unit (CPU). Machine code is in binary (0’s and 1’s) format which is completely different from the byte code and source code. It is regarded as the most lowest-level representation of the source code. Machine code is obtained after compilation or interpretation. It is also called machine language.

The below figure illustrates the example of how Java source code is converted to Byte code and then to machine code : 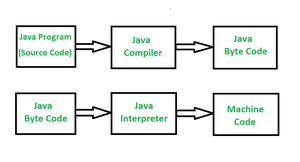