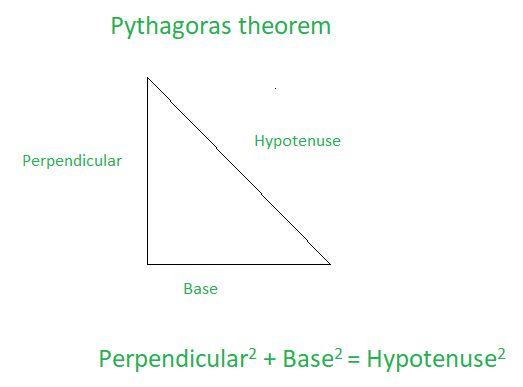 The longest side of a right triangle is the side opposite to the right angle, which is the hypotenuse. Also, we can see in the above diagram, that square of two sides which is adjacent to the 90-degree angle is equal to the square of the hypotenuse.

Let’s see some basic examples of the Pythagorean theorem.

Example 1: Determine the height of an equilateral triangle of side 16 units?

For the given problem we can split the triangle into two equal parts from which we can get the hypotenuse length is 16 units. And the other leg is 8 units i.e. half of 16 units. So, let the height be x.

Example 2: A man goes 60m due west then 60m due north. Find his distance from the starting point? 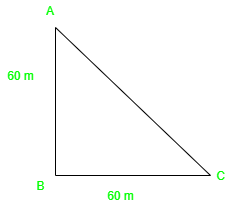 According to the given question, we can draw the diagram as shown above and we have to find the distance AC.

Now, According to the Pythagoras theorem, we can get the equation as

In the postulate of SAS, in comparison among two triangles, if two sides and the angle included between two sides are equal. Then it satisfies the condition of SAS.

If any two angles of a triangle and non-included side are equal to the two angles and side of the corresponding triangle. Then it will satisfy the AAS congruency. 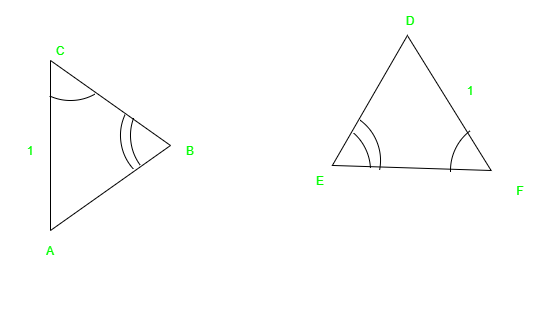 From the given figure, we can say that,

From the above-given example of a right-angled triangle, we get AC = DF and BC = EF. Hence, ΔACB ≅ ΔDFE.

So, from this above condition, we cannot justify that Δ ABC ≅  ΔDEG. To understand this, let’s construct a line DF in Δ DEG as shown above, and DF is congruent to AC and DG. We have got a new triangle i.e. Δ DEF.

Now, we can see that AC is congruent to DF, ∠B = ∠E, and AC = DE. But,  Δ ABC is not congruent to ΔDEF. Because of which we can make a conclusion that SSA is not only sufficient to tell that triangles are congruent. Therefore, it is important to know the ∠A and ∠D means the angle between the two sides.