Consider extended bodies to be rigid bodies, and you can solve a lot of problems with them. A rigid body is one that has a precisely defined and unchanging shape. The distances between all pairs of particles in a body like this remain constant. Because real bodies flex under the impact of forces, this definition of a rigid body shows that no real body is genuinely rigid. However, in many cases, the deformations are insignificant. On the other hand, we can overlook the fact that bodies like wheels, tops, steel beams, molecules, and planets warp (twist out of shape), bend, or vibrate in a variety of settings and perceive them as solid.

The rolling motion is one of the most prevalent movements seen in everyday life. There is a rolling motion in all wheels used in transportation like cars, buses, trains, airplanes, bikes, buffalo carts and there are so many things that have wheels attached to them like trollies. For clarity let’s begin with the example of a disc, but the result applies to any rolling body rolling on a level surface. It is assumed that the disc isn’t slipping when it rolls. This implies that the bottom of the disc in touch with the flat surface is at rest on the surface at any given time.

What is Rolling Motion?

During a body’s rolling motion, the surfaces which come into contact get to deform slightly, and that deforms is temporary that is when the area of both bodies comes into touch with each other, results in temporary deformation of the bodied. This phenomenon has the impact effect called friction that is the component of the contact force parallel to the surface that resists the motion.

Translatory motion is a sort of motion in which all portions of the body move the same distance in the same amount of time. There are two forms of translation motion: rectilinear and curvilinear. 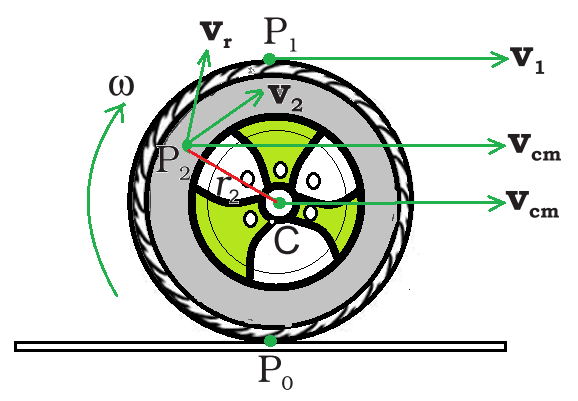 The rolling motion (without slipping) of a wheel on a level surface.

Substitute I = mk2 where k is the corresponding radius of a rapidly moving body and ω=vcm/R where R is the radius of the circular moving body.

Types of Motion of a Rigid Body

Let’s look at some examples of rigid body motion. Let’s start with a rectangular block that slides down an inclined plane without moving sideways. The block is treated as if it were a rigid body. Its travel down the plane is such that all the body’s particles are moving in lockstep, i.e. they have the same velocity at all times. The rigid body is in pure translational motion in this scene. 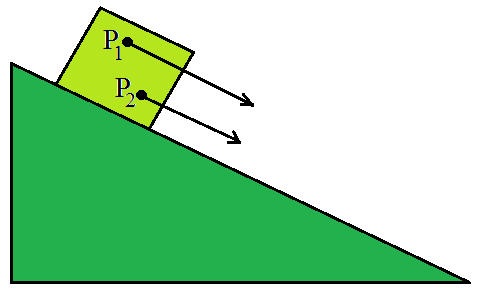 Translational (sliding) motion of a block down an inclined plane. (Any point like P1 or P2 of the block moves with the same velocity at any instant of time.) 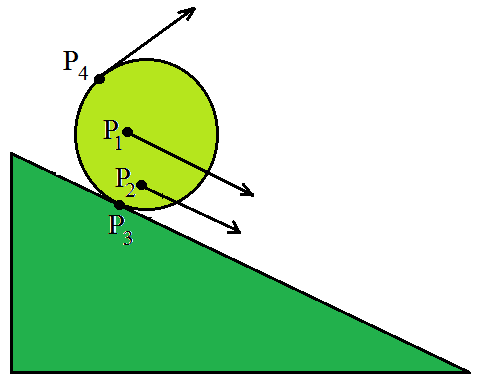 The rolling motion of a cylinder. It is not pure rapture translational motion. Points P1, P2, P3, and P4 have different velocities (shown by arrows)at any instant of time. In fact, the velocity of the point of contact P3 is zero at any instant, if the cylinder rolls without slipping. 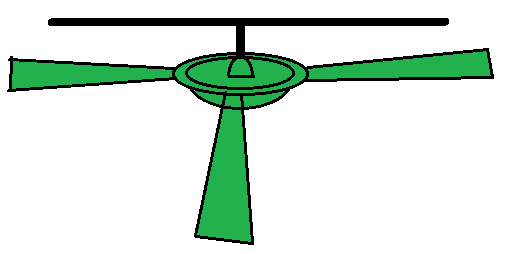 Rotation about a fixed axis a ceiling fan. 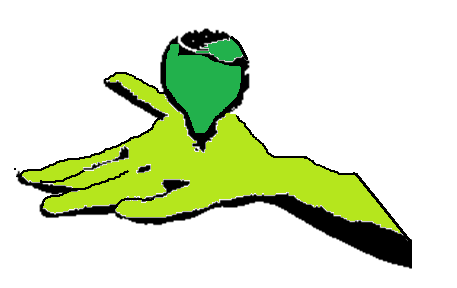 Problem 1: Three bodies, a ring, a solid cylinder, and a solid sphere roll down the same inclined plane without slipping. They start from rest. The radii of the bodies are identical. Which of the bodies reaches the ground with maximum velocity?

The expression for the kinetic energy is

where v is the final velocity of the Centre of mass of the body. 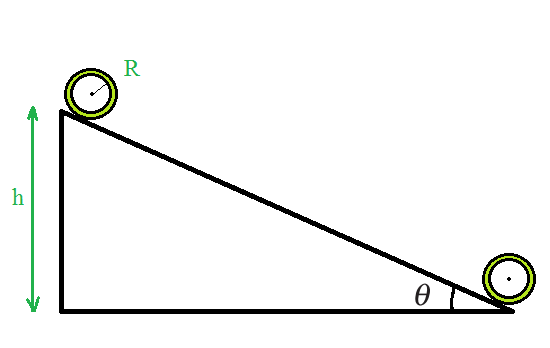 Here, velocity is independent of the mass of the rolling body,

For a ring, k2= R2, therefore the expression can be written as 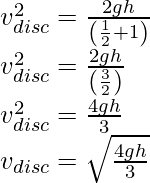 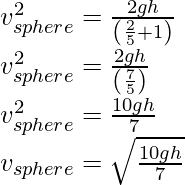 The results show that the sphere has the greatest and the ring has the least velocity of the centre of mass at the bottom of the inclined plane.

(i) Using theorem of perpendicular axes, the moment of inertia of the disc about an axis passing through its centre and normal to the disc can be written as

(ii) Using theorem axes, moment of inertia of the disc passing through a point on its edge and normal to the dies can be written as

Let the radius of the hollow cylinder, and the solid sphere be R and the mass M .

Let the magnitude of the torque applied to the cylinder and the sphere is τ , Which produce angular accelerations α1 and α2.

Then, the magnitude of the torque can be expressed as

Problem 5: A ring of mass m and radius R has three particles attached to the ring as shown in the figure. The center of the ring has a speed v0. If the kinetic energy of the system is xmv0 2. Find x (Slipping is absent)

The expression for the rolling motion when slip is absent is,

The speed of the m particle placed at right side is

The speed of the m particle placed at top is

The kinetic energy placed at left , right and top is

Kinetic energy of the ring is

The total kinetic energy is

Therefore, the value of x is 6.