Having gained the knowledge of how to draw a basic Finite State Machine ( DFA, NFA or

-NFA ). We head to deriving a Regular Expression from the provided state machine.

For certain examples provided below, it’s fairly simple to derive it.

But for the following example, it’s fairly hard to derive the Regular Expression by just observing the Finite State Machine. For this purpose, we make use of Arden’s Theorem to simplify our Individual State Equations and come up with our final state equation ( which may or may not be the simplified version )

Arden’s Theorem states that, if P & Q are two regular expressions over

, and if P does not contain

Let’s solve the provided automata above with the help of Arden’s Theorem.

We see, that on state C, there is a state transition coming from B when a is the input

On state A, There is a

transition ( being the start state,

transition must be included), a self loop on input a, a transition from B when input is b.

As a final step, Let’s combine all the simplified equations onto the final state C

Now this example corresponded to direct derivation from a provided NFA to a Regular Expression.

Let’s say, we are provided with a problem that goes like

Problem : Derive a regular expression to represent a language having even no. of a’s

For this case, it’s difficult to arrive at a regular expression with just trial and error methodology.
We might come across sample solutions like :-

which might satisfy some cases, but also leads to unwanted cases and missing cases with alternate a’s and b’s.
The best way to solve this problem is to first draw a finite state machine for the same, and then derive the regular expression from the same.

The figure below shows the DFA for the provided problem 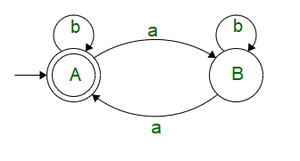 Now that we have the DFA, let’s solve it using Arden’s Theorem of Individual State Equations.

We see that on state A, there is a self loop with input b and transition from B with input a

We see that on state B, there is a self loop on input b and transition from A when input is a.

Taking equation for B, we can apply Arden’s theorem

Substituting the value of B in A we get

Hence, the regular expression for the provided problem is RE : ( b + ab*a )*

We see that Arden’s theorem can be used as a powerful simplification tool to determine the Regular Expressions and also to design the desired Finite State Machine from the same.