We have discussed Pushdown Automata (PDA) and its acceptance by empty stack article. Now, in this article, we will discuss how PDA can accept a CFL based on the final state. Given a PDA P as:

The language accepted by P is the set of all strings consuming which PDA can move from initial state to final state irrespective of any symbol left on the stack which can be depicted as:

Let us see how this automaton works for aaabbb: 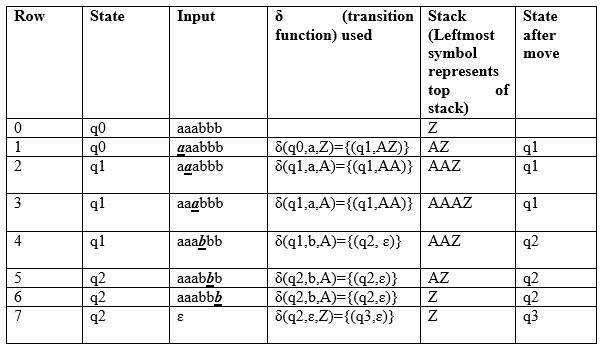 As we can see in row 4, the input has been processed and PDA is in state q2 which is a non-final state, the string aab will not be accepted. Let us discuss the question based on this:

Solution: We first label the state of the given PDA as:

As we can see, q0 is the initial as well as the final state, ɛ will be accepted. For every a, X is pushed onto the stack and PDA remains in the final state. Therefore, any number of a’s can be accepted by PDA. If the input contains b, X is popped from the stack for every b. Then PDA is moved to the final state if the stack becomes empty after processing input (δ( q1, ɛ, Z) = {( q2, Z)}). Therefore, a number of b must be equal to the number of an if they exist. As there is only one move for a given state and input, the PDA is deterministic. So, the correct option is (D).