What is Context in Android?

Android apps are popular for a long time and it is evolving to a greater level as user’s expectations are that they need to view the data that they want in an easier smoother view. Hence, the android developers must know the important terminologies before developing the app. In Android Programming we generally come across a word context. So what exactly is this context and why is it so important? To answer this question lets first see what the literal meaning of context is:

The circumstances that form the setting for an event, statement, or idea, and in terms of which it can be fully understood

Looking at this definition we come across two things:

Similarly when we talk about the Android Programming context can be understood as something which gives us the context of the current state of our application. We can break the context and its use into three major points:

In the official Android documentation, context is defined as:

Interface to global information about an application environment. This is an abstract class whose implementation is provided by the Android system. It allows access to application-specific resources and classes, as well as up-calls for application-level operations such as launching activities, broadcasting and receiving intents, etc.

Let’s a person visit a hotel. He needs breakfast, lunch, and dinner at a suitable time. Except for these things there are also many other things, he wants to do during the time of stay. So how does he get these things? He will ask the room-service person to bring these things for him. Right? So here the room-service person is the context considering you are the single activity and the hotel to be your app, finally, the breakfast, lunch & dinner have to be the resources.

How Does This Work?

1. It is the context of the current/active state of the application.

Usually, the app got multiple screens like display/inquiry/add/delete screens(General requirement of a basic app). So when the user is searching for something, the context is an inquiry screen in this case.

2. It is used to get information about the activity and application.

The inquiry screen’s context specifies that the user is in inquiry activity, and he/she can submit queries related to the app

3. It is used to get access to resources, databases, and shared preferences, etc.

4. Both the Activity and Application classes extend the Context class.

In android, context is the main important concept and the wrong usage of it leads to memory leakage. Activity refers to an individual screen and Application refers to the whole app and both extend the context class.

Types of Context in Android

There are mainly two types of context are available in Android.

The Overall view of the App hierarchy looks like the following:

This context is tied to the life cycle of an application. Mainly it is an instance that is a singleton and can be accessed via getApplicationContext(). Some use cases of Application Context are:

It is used to return the context which is linked to the Application which holds all activities running inside it. When we call a method or a constructor, we often have to pass a context and often we use “this” to pass the activity context or “getApplicationContext” to pass the application context. This method is generally used for the application level and can be used to refer to all the activities. For example, if we want to access a variable throughout the android app, one has to use it via getApplicationContext().

Inside the activity class, set the name and email of GlobalExampleClass, which can be accessed from another activity. Let us see via the below steps.

So, whenever the variable scope is required throughout the application, we can get it by means of getApplicationContext(). Following is a list of functionalities of Application Context.

Some use cases of Activity Context are:

It returns the Context which is linked to the Activity from which it is called. This is useful when we want to call the context from only the current running activity.

From the functionalities of both Application and Activity, we can see that the difference is that the Application Context is no way related to UI. It should be used only to start a service or load resource values etc. Apart from getApplicationContext() and getContext(), getBaseContext() or this are the different terminologies used throughout the app development. Let us see with an example

The base context is set by the constructor or setBaseContext().This method is only valid if we have a ContextWrapper. Android provides a ContextWrapper class that is created around an existing Context using:

“this” argument is of a type “Context”.  To explain this context let’s take an example to show a Toast Message using “this”. 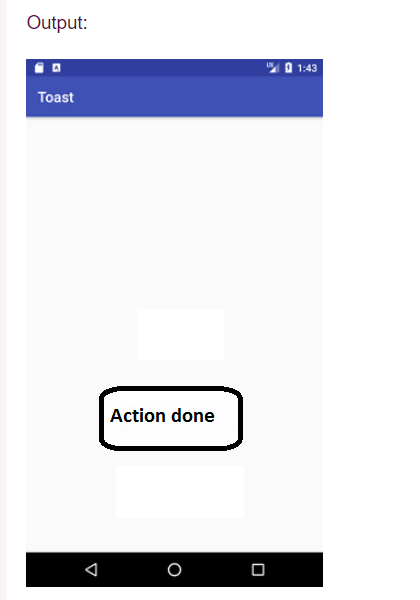 Another example to start the activity using “this”: