Android Jetpack is a set of software components, libraries, tools, and guidance to help in developing robust Android applications. Launched by Google in 2018, Jetpack comprises existing android support libraries, android architecture components with an addition of the Android KTX library as a single modular entity. Nowadays, nearly 99% of the apps present on the Google Play Store uses Android Jetpack libraries. Moreover, to deal with changes/updates in data and application lifecycle, Google introduced Architecture components. This article explains each and every library of this component in detail. Jetpack consist of a wide collection of libraries that are built in a way to work together and make robust mobile applications. Its software components have been divided into 4 categories:

Further, Architecture Components could be classified as follows: 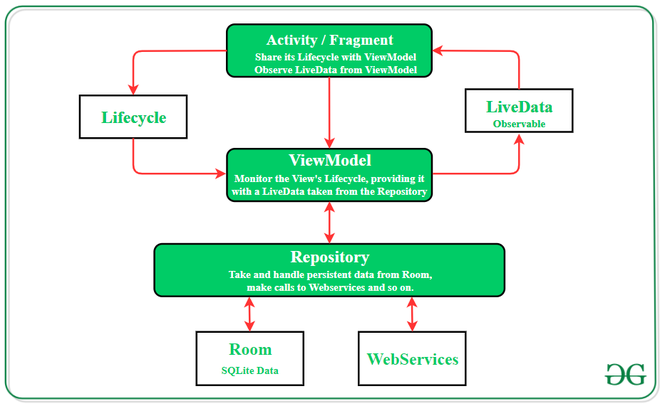 Android Jetpack with its architecture component defines some key principles which one should follow as a secure path to develop good and robust mobile apps. It does not support any particular architecture pattern but suggests a clear separation of concerns and controlling of UI from Model. By following these rules, developers can avoid problems related to lifecycle and it will be easy to test and maintain the application.

Following are the architecture component’s element and their responsibilities

The requirement of a database in Android is fulfilled by SQLite from the very beginning. However, it comes with some severe drawbacks like not checking the queries at compile-time, it does not save plain-old-Java Objects(commonly referred to as POJOs). Developers also need to write a lot of boilerplate code to make the SQLite database work in the Android OS environment. The Room component comes into the picture as an SQLite Object Mapping Library which overcomes all the mentioned challenges. Room converts queries directly into objects, check errors in queries at the compile-time, and is also capable of persisting the Java POJOs.

Moreover, it produces LiveData results/observables from the given query result. Because of this versatile nature of the Room component, Google officially supports and recommends developers to use it. The Room consists of the following sub-components: 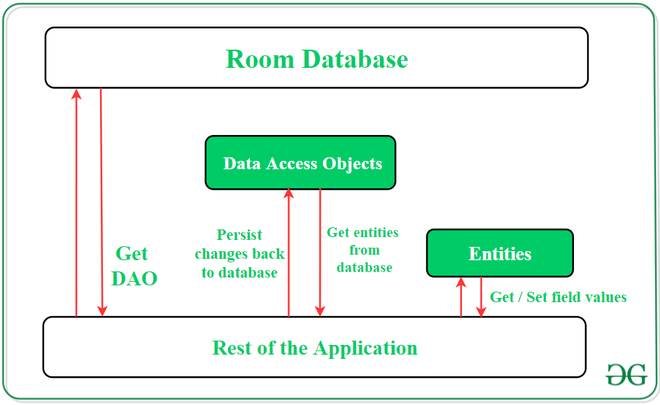 WorkManager API provides an optimal solution to manage the background tasks in Android which are deferrable(can be run later and is still useful) as well as guaranteed(runs even if the device restarts) in nature. Its capability to cover the power-saving feature of Android and the ability to run with or without Google Play Services are the reasons for its popularity among developers. Further, it is also backward compatible with API level 14.

The ability of android devices to download a file/document in chunks i.e., occasionally(like user resumes download as per the availability of the WiFi Network) and the feature of saving the downloaded state even if the device restarts is possible only because of WorkManager API. Its execution of tasks depends upon the order of requests made by the user and for each work request, it returns the state which is displayed on the UI of the device. 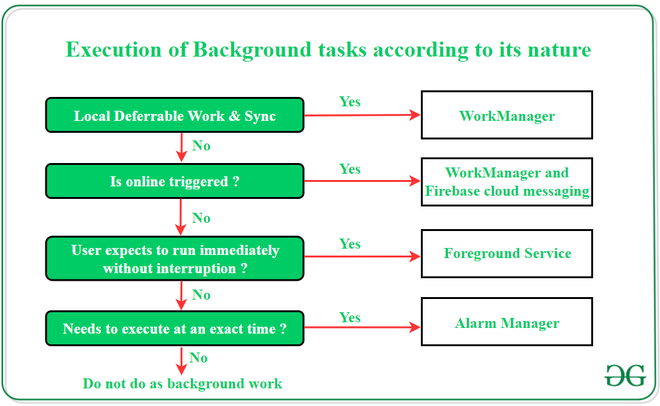 Details of the lifecycle state of an android component are stored in the Lifecycle class and it permits other components/objects to observe this state. An android component is lifecycle-aware if it has the ability to detect the change in the lifecycle state of other components and respond accordingly. Proper management of application lifecycles is a challenging task for the developers as it can lead to severe issues like memory leaks and app crashing. The android.arch.lifecycle package facilitates the developers by managing the lifecycles attached to the components directly by the system. By implementing the LifecycleObserver interface within the desired class, it can be configured to be lifecycle-aware. 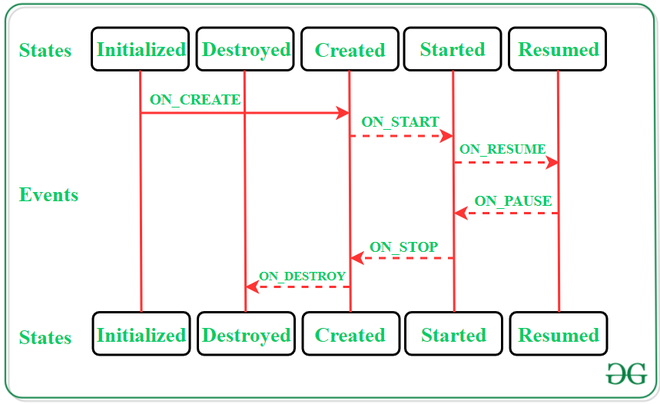 There are 2 ways to create Activity / Fragment which are Lifecycle aware:

ViewModel is one of the most critical classes of the Android Jetpack Architecture Component that support data for UI components. Its purpose is to hold and manage UI-related data. Moreover, its main function is to maintain the integrity and allows data to service during configuration changes like screen rotations. Any kind of configuration change in Android devices tends to recreate the whole activity of the application. It means the data will be lost if it has been not saved and restored properly from the activity which was destroyed. To avoid these issues, it is recommended to store all UI data in the ViewModel instead of an activity. 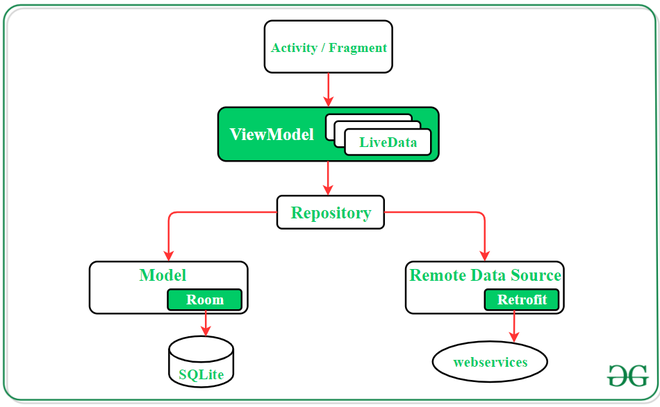 An activity must extend the ViewModel class to create a view model: 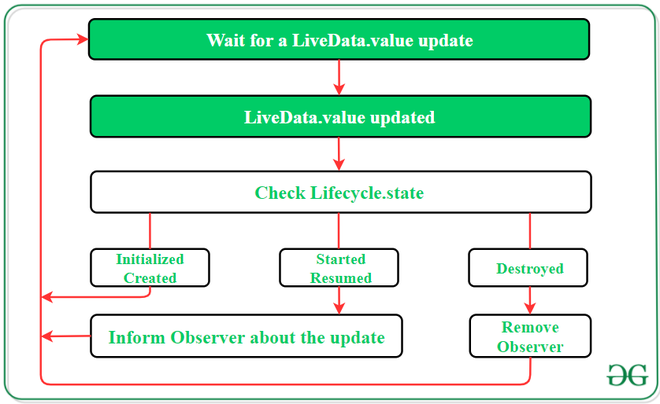 It is necessary to implement onActive and onInactive methods by LiveData:

In order to observe a LiveData Component observer(LifecycleOwner, Observer<T>) method is called:

The navigation component of Android architecture is a framework for designing the in-app UI. Developers can follow the single-activity app architecture to structure the application UI. Navigation manages the complexity related to the fragment transactions in the application. It also facilitates developers to display transitions and Back behavior.

By using the Navigation Component, one can get all the benefits of other Architecture components as well like Lifecycle and ViewModel. It helps in implementing basic navigation styles like simple button clicks to complex navigation patterns like app bar and navigation drawer. Further, it also supports deep links and helpers which enables the connection of this component with the navigation drawer and bottom navigation.

While developing an android application, it is very much important to organize the data loading process. Mostly, apps display one activity/fragment at a time and thus require to load and display only a small section of data. However, at the same time, the application is processing a large dataset that is currently of no use. Thus, it is a critical area of the application which must be handled, otherwise can lead to waste of the device’s battery and the network bandwidth.

The Paging library of the Android architecture component provides the optimal solution to these issues. This library provides the facility to load the application data slowly and in a cautious manner. Moreover, paging is a very cooperative library for those applications in which the displayed data is updating continuously as it provides a list of unbounded sites as well as large but bounded lists. Following are the three common ways of loading data through the paging library:

Data Binding library is a support library that provides the feature of binding UI components in an activity/fragment to the data sources of the application. The library carries out this binding task in a declarative format and not in a programmatical way. Below is an example to understand the working of this library accurately:

To find a TextView widget and bind it to the userName property of the ViewModel variable, the findViewById() method is called:

After using the Data Binding library, the above code changes by using the assignment expression as follows:

Code snippet to add jetpack architecture components such as LiveData and ViewModel: