What is tools:context in Android Layout Files?

Android Studio provides a much richer variety of functions in the form of various XML attributes in the tools namespace which enables design-time features or compile-time behaviors. When the app is being built, the build tools remove these attributes so that there is no effect on runtime behavior or APK size. tools:context is such an attribute that is defined in any root view and declares which activity or fragment the layout is associated with. 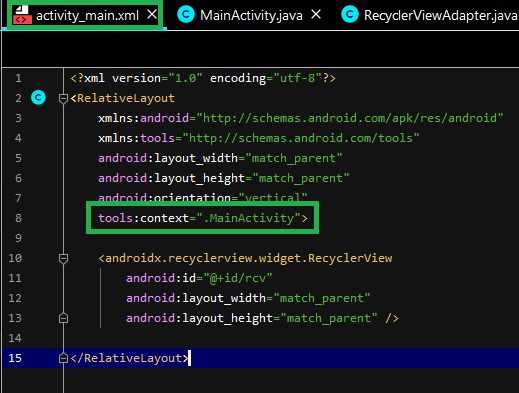 This declaration helps in enabling various features in the layout preview which demands the knowledge of the activity such as automatically choosing the necessary theme for preview. Let’s see a small demonstration of the above stated. Now, whenever a project is created in android studio or any activity or fragment is added the following code gets generated automatically in the layout file:

You can also specify the activity class name yourself using the same dot prefix as stated in the manifest file. Another use of the tools:context is in the form of figuring out where to place the onClick handlers (to respond to touch events) when you implement it using the quickfix. 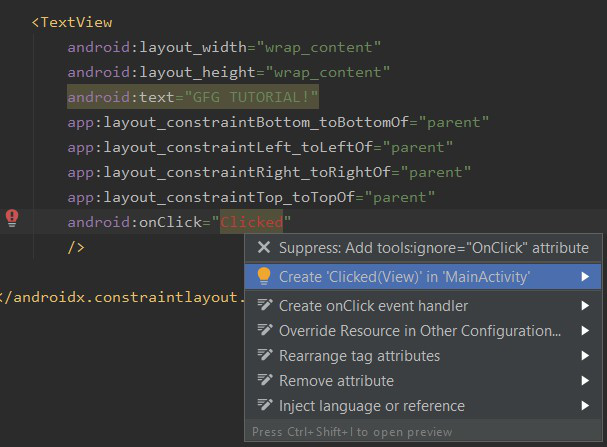 showcasing the use of tools:context in using the quickfix

Now if you were to delete the tools:context attribute then there would be no recommendation for the quickfix. So to summarize, tools:context attribute is declared in the rootview of the layout file and it declares which activity or fragment the layout file is associated with. It is also used for better visualization of the current layout and view.