There are 2 types of traffic shaping algorithms:

Suppose we have a bucket in which we are pouring water, at random points in time, but we have to get water at a fixed rate, to achieve this we will make a hole at the bottom of the bucket. This will ensure that the water coming out is at some fixed rate, and also if the bucket gets full, then we will stop pouring water into it.

The input rate can vary, but the output rate remains constant. Similarly, in networking, a technique called leaky bucket can smooth out bursty traffic. Bursty chunks are stored in the bucket and sent out at an average rate. 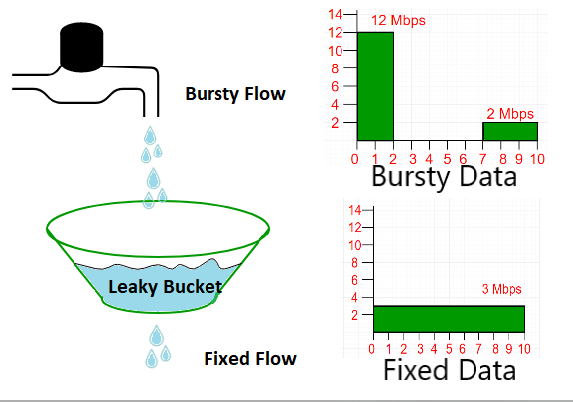 Without the leaky bucket, the beginning burst may have hurt the network by consuming more bandwidth than is set aside for this host. We can also see that the leaky bucket may prevent congestion.

A simple leaky bucket algorithm can be implemented using FIFO queue. A FIFO queue holds the packets. If the traffic consists of fixed-size packets (e.g., cells in ATM networks), the process removes a fixed number of packets from the queue at each tick of the clock. If the traffic consists of variable-length packets, the fixed output rate must be based on the number of bytes or bits.

The following is an algorithm for variable-length packets:

Initialise n = 1000 on another tick of the clock.
This procedure is repeated until all the packets are sent into the network.

Below is the implementation of above explained approach:

Difference between Leaky and Token buckets –

Some advantage of token Bucket over leaky bucket