Prerequisite : Sliding Window Protocol – Set 1 (Sender Side), Set 2 (Receiver Side) Why Selective Repeat Protocol? The go-back-n protocol works well if errors are less, but if the line is poor it wastes a lot of bandwidth on retransmitted frames. An alternative strategy, the selective repeat protocol, is to allow the receiver to accept and buffer the frames following a damaged or lost one. Selective Repeat attempts to retransmit only those packets that are actually lost (due to errors) :

Selective Repeat Protocol (SRP) : This protocol(SRP) is mostly identical to GBN protocol, except that buffers are used and the receiver, and the sender, each maintains a window of size. SRP works better when the link is very unreliable. Because in this case, retransmission tends to happen more frequently, selectively retransmitting frames is more efficient than retransmitting all of them. SRP also requires full-duplex link. backward acknowledgements are also in progress. 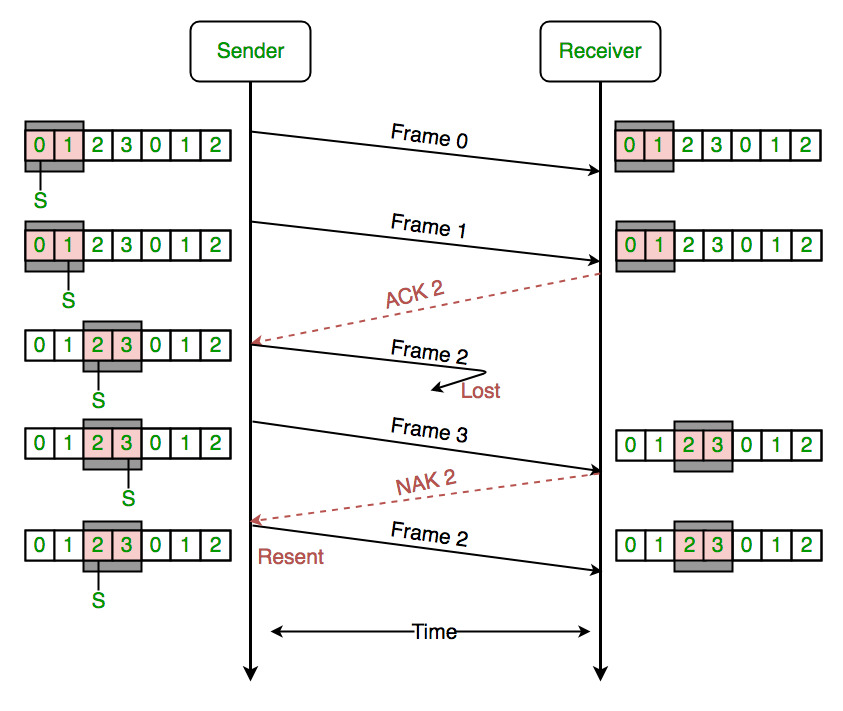 Figure – the sender only retransmits frames, for which a NAK is receivedEfficiency of Selective Repeat Protocol (SRP) is same as GO-Back-N’s efficiency :

References – Slideshare Youtube MIT article This article is contributed by Akash Sharan. If you like GeeksforGeeks and would like to contribute, you can also write an article using write.geeksforgeeks.org or mail your article to review-team@geeksforgeeks.org. See your article appearing on the GeeksforGeeks main page and help other Geeks. Please write comments if you find anything incorrect, or you want to share more information about the topic discussed above.