In this article, we will learn a good concept of how the TCP/UDP checksum is calculated.

The protocol we use in OSI in the Transport layer is TCP. So, after breaking the data from the application layer into smaller parts. This broken part form the body of the TCP.

It has fields like Source and Destination Port addresses, urgent pointer, Checksum, etc.

In this article, we are only concerned about the CheckSum field of the TCP.

The CheckSum of the TCP is calculated by taking into account the TCP Header, TCP body and Pseudo IP header.

Now, the main ambiguity that arises that what is how can checksum be calculated on IP header as IP comes into the picture in the layer below the Transport Layer.

In simple terms, it means that we are in Transport Layer and the IP data packet is created in Network Layer.

Then how can we estimate the size of the IP header from the Transport because the guess/estimation would be definitely wrong and thus there would be no point in calculating the checksum on a field which is wrong at the beginning itself?

The error checking capability of TCP/UDP in Transport Layer takes help from the network layer for proper error detection.

But the important concept to note here is that we actually don’t use the IP header rather we use a part of the IP header.

To overcome all these errors and increase error checking capability we use Pseudo IP header.

The Fields of the Pseudo IP header are:- 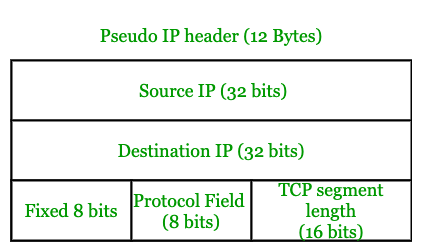 So, this Pseudo Header is not transported across the network, rather the actual IP header which is formed in Network Layer is transported.

So, the TCP checksum includes the:- 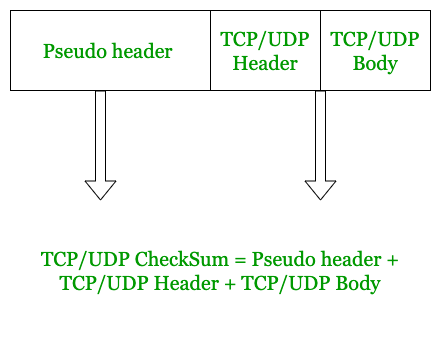