Major reasons why an exception Occurs

Errors represent irrecoverable conditions such as Java virtual machine (JVM) running out of memory, memory leaks, stack overflow errors, library incompatibility, infinite recursion, etc. Errors are usually beyond the control of the programmer, and we should not try to handle errors.

Let us discuss the most important part which is the differences between Error and Exception that is as follows:

All exception and error types are subclasses of class Throwable, which is the base class of the hierarchy. One branch is headed by Exception. This class is used for exceptional conditions that user programs should catch. NullPointerException is an example of such an exception. Another branch, Error is used by the Java run-time system(JVM) to indicate errors having to do with the run-time environment itself(JRE). StackOverflowError is an example of such an error.

Java defines several types of exceptions that relate to its various class libraries. Java also allows users to define their own exceptions. 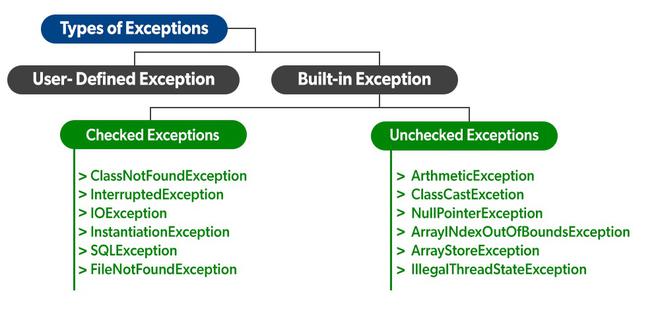 Exceptions can be categorized in two ways:

Let us discuss the above-defined listed exception that is as follows:

Sometimes, the built-in exceptions in Java are not able to describe a certain situation. In such cases, users can also create exceptions, which are called ‘user-defined Exceptions’.

The advantages of Exception Handling in Java are as follows:

Methods to print the Exception information:

3.getMessage() -This method prints only the description of the exception.

How Does JVM handle an Exception?

Default Exception Handling: Whenever inside a method, if an exception has occurred, the method creates an Object known as an Exception Object and hands it off to the run-time system(JVM). The exception object contains the name and description of the exception and the current state of the program where the exception has occurred. Creating the Exception Object and handling it in the run-time system is called throwing an Exception. There might be a list of the methods that had been called to get to the method where an exception occurred. This ordered list of the methods is called Call Stack. Now the following procedure will happen.

Look at the below diagram to understand the flow of the call stack. 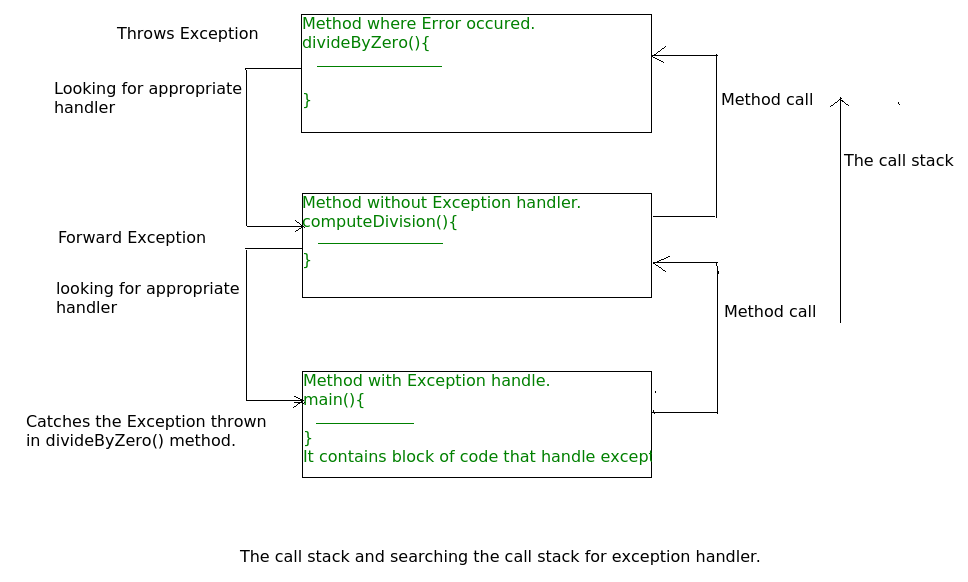 Let us see an example that illustrates how a run-time system searches for appropriate exception handling code on the call stack.

How Programmer Handles an Exception?

Customized Exception Handling: Java exception handling is managed via five keywords: try, catch, throw, throws, and finally. Briefly, here is how they work. Program statements that you think can raise exceptions are contained within a try block. If an exception occurs within the try block, it is thrown. Your code can catch this exception (using catch block) and handle it in some rational manner. System-generated exceptions are automatically thrown by the Java run-time system. To manually throw an exception, use the keyword throw. Any exception that is thrown out of a method must be specified as such by a throws clause. Any code that absolutely must be executed after a try block completes is put in a finally block.

Tip: One must go through control flow in try catch finally block for better understanding.

Consider the below program in order to get a better understanding of the try-catch clause.

Output explanation: In the above example, an array is defined with size i.e. you can access elements only from index 0 to 3. But you trying to access the elements at index 4(by mistake) that’s why it is throwing an exception. In this case, JVM terminates the program abnormally. The statement System.out.println(“Hi, I want to execute”); will never execute. To execute it, we must handle the exception using try-catch. Hence to continue the normal flow of the program, we need a try-catch clause.

How to Use the try-catch Clause?

Certain below key points are needed to be remembered that are as follows:

The summary is depicted via visual aid below as follows: 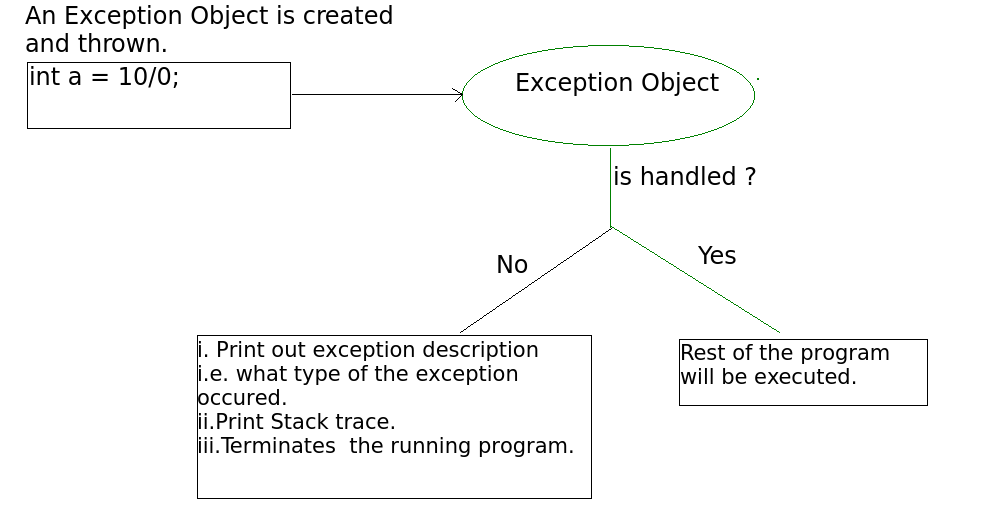 This article is contributed by Nitsdheerendra and Gaurav Miglani. If you like GeeksforGeeks and would like to contribute, you can also write an article using write.geeksforgeeks.org or mail your article to review-team@geeksforgeeks.org. See your article appearing on the GeeksforGeeks main page and help other Geeks. Please write comments if you find anything incorrect, or you want to share more information about the topic discussed above.

Find the right course for you to start learning Java Programming Foundation from the industry experts having years of experience. This Java Programming Foundation – Self Paced Course covers the fundamentals of the Java programming language, data types, operators and flow control, loops, strings, and much more. No more waiting! Start Learning JAVA Now and Become a Complete Java Engineer!