Motion in a plane is also known as two-dimensional motion. For instance, circular motion, projectile motion, and so on. The reference point for such motion analysis will be an origin and the two coordinate axes X and Y. In this section we will discuss the Projectile motion.

The motion of an object thrown or projected into the air, subject only to the acceleration of gravity, is referred to as projectile motion. The object is known as a projectile, and its path is known as its trajectory. Falling object motion, as described in Problem-Solving Basics for One-Dimensional Kinematics, is a simple one-dimensional type of projectile motion with no horizontal movement. In this section, we look at two-dimensional projectile motion, such as that of a football or other object with negligible air resistance.

The most important thing to remember here is that motions along perpendicular axes are independent of one another and can thus be analyzed separately. This was discussed in Kinematics in Two Dimensions: An Introduction, where it was demonstrated that vertical and horizontal motions are independent. The key to understanding two-dimensional projectile motion is to divide it into two motions, one horizontal and one vertical. (This is the most logical choice of axes because gravity’s acceleration is vertical, so there will be no acceleration along the horizontal axis when air resistance is negligible.)

Of course, in order to describe motion, we must consider velocity, acceleration, and displacement. We must also locate their components along the x– and y–axes. We will assume that all forces other than gravity (such as air resistance and friction) are negligible. The components of acceleration are then very straightforward:

Because the accelerations are constant, the kinematic equations can be applied.

A projectile is any object thrown into space with only gravity acting on it. The primary force acting on a projectile is gravity. This is not to say that other forces do not act on it; rather, their impact is minimal when compared to gravity. A trajectory is a path taken by a projectile.

Before understanding the derivation of the relation for projectile motion lets first introduce some terms use in it, that are:

Consider the following example of a ball which is projected at an angle θ from the point O with respect to the horizontal x-axis with an initial velocity u: 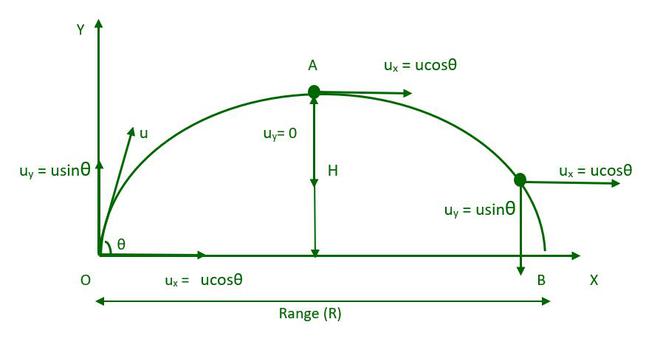 We can use differential equations of motion to find various parameters related to projectile motion.

We know that the linear equation of motion are:

Applying the above equation for projectile motion the equation will be:

As we can see from the formula of Time of flight, time taken by the projectile is directly proportional to the angle of projection. For any given initial velocity(u) will be constant and g is always constant i.e. g=-9.8 m/s2.

When projectile is projected at an angle of  90° time of flight will be maximum.

When the projectile is projected at an angle of 30° time of flight is half of the tmax .

Horizontal range is a distance(OB) it can be given as:

As a result, the Horizontal Range of the projectile is given by (R):

It is the highest point of the particle (point A). When the ball reaches at the point A, the vertical component of the velocity (Vy) will be zero.

Therefore, the Maximum Height of the projectile is given by (Hmax):

If we project a projectile at an angle of 90° it achieves maximum height (Hmax).

The equation of Trajectory:

Equation of the trajectory is a path followed by the particle during the projectile motion. The equation is:

Examples of two-dimensional motion are as follows,

Some Applications of the Projectile motion:

Problem 1: What is projectile? Prove that the path of a projectile is parabolic.

Projectile: A projectile is any object thrown into space with only gravity acting on it.

The above equation of trajectory is similar to a parabola. So it is proved that the path of a projectile is parabolic.

Problem 2: At what angle projectile should be projected so that the height and Range of the projectile will be equal?

If height and horizontal range will be equal than, H = R.

Problem 3: Define horizontal range and find the range of a projectile thrown at 98 m/s with an angle of 30 degrees from horizontal? (g =9.8 m/s2)

Horizontal Range- The horizontal distance traveled by the body performing projectile motion is referred to as the range of the projectile.

Problem 4: Name the physical quantities which will remain unchanged during the projectile motion?

Problem 5: What is the maximum height attained by a ball of mass 100 g projected at an angle of 30° from the ground with an initial velocity of 11 m/s and an acceleration due to gravity of g = 10 m/s2?

We know that the formula for maximum height is,

Problem 6:A football is launched at a 45° angle from the ground with an initial velocity of 10 m/s; the gravity acceleration is g = 10 m/s2. What is the time of flight?

We know that the formula for calculating the time of flight is,

Problem 7: A projectile is projected from point O at an angle of 30° with an initial velocity of 30 m/s. The projectile hits the ground at point M. (Consider acceleration of gravity g = 10m/s2) Find the following: 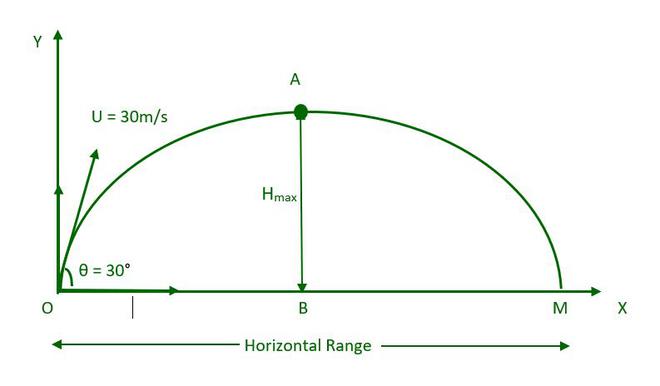 Putting the given values,

We know the formula for horizontal range is:

Maximum height of the projectile is given by the formula: