It has probably seen that if a cup of hot tea is left on a table for a long period, it cools down. This is due to heat loss to the environment. As a result, heat transfer is described as the transmission of heat or thermal energy from one physical system to another. Therefore, when two bodies have a temperature differential, heat is transported from the hot body to the cooler body. Conduction, convection, and radiation are the three most frequent ways of heat transfer. We’ll talk about heat transmission by convection in this post.

The action of heat transmission through movement of major number of molecules inside fluids such as gases and liquids is known as convection.

The initial heat transmission between the item and the fluid occurs by conduction, but the bulk of the heat transfer occurs because of fluid motion.

Solids do not experience convection because their basic particles do not move. The process of heat diffusion in solids is known as thermal conduction. Under normal conditions, gases and liquids are poor heat conductors, however, they may quickly transport heat by convection. 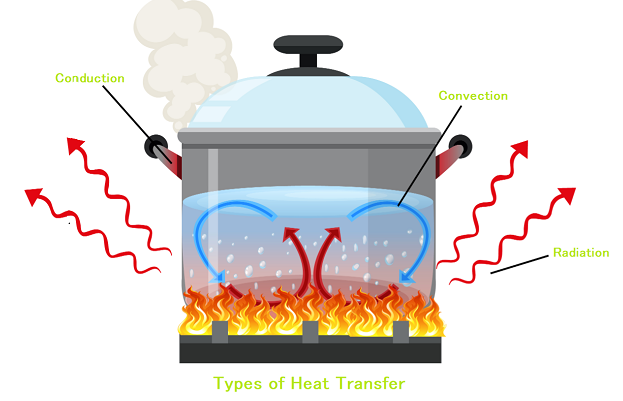 Convection Heat Transfer: How Does It Work?

Convection is the process of heat transfer between a solid and a liquid or fluid that is in contact with the solid. When transmitting heat from one liquid to another through a barrier, convection is essential. Convectional heat transfer occurs either through thermal diffusion (fluid molecule motion) or advection, in which heat is transferred through the bulk motion of heat currents in the fluid.

Thermal expansion occurs when any fluid is heated from below. The fluid’s density decreases in lower layers as it becomes hotter. The hotter, less dense part of fluid rises because of buoyancy and is replaced by denser, colder fluid. When this part heats up, it also rises and replaced by the upper colder layer, and the process is repeated. In this way, convection is used to transmit heat.

Convection may be divided into two types:

Forced convection: It occurs when an external source such as a pump or fan is utilized to produce convection. Utilizing water geysers or heaters for quick water heating, as well as using fans on warm summer days, are examples of forced convection.

Under typical circumstances, convection heat transfer is proportional to the temperature differential between the components. This phenomenon has been stated by Newton’s law of cooling, which states:

Newton’s law of cooling is connected to forced convection, which is written as:

where, P = dq⁄dt is the heat transfer rate, h is the heat-transfer coefficient of convection, A is the surface area of body which is exposed, Ts is the body temperature and Tf  is the fluid temperature.

The heat-transfer coefficient value depends on the various factors:

Sea Breeze: During the day, there is a wind from the sea. Both the water and the land are heated by the sun. Because the water has a higher heating capacity than land, it receives more of the sun’s energy yet warms up considerably more slowly. As a result, the temperature above the land rises, heating the air in the surrounding environment.

Warm air expands because it is less dense, resulting in a low-pressure region over the land along the shore. Meanwhile, the water is under considerably higher pressure. Due to pressure difference in air, the air flows from sea to land. As a result, an unexpected gust of wind is felt known as the sea breeze.

Land Breeze: When the situation changes at night, these phenomena arise. The land and sea begin to chill as the sunsets. Due to variations in heat capacity, the land loses heat faster when compared to water. Comparably, the water temperature becomes higher, resulting in low air pressure there. This creates a cool wind off the coast, known as the land breeze.

Problem 1: What role does convection play in our daily lives?

In the following situations, convection is used:

Problem 2: Why does not solid materials experience convection?

Convection is the process of heat transfer through movement of particles. Since, the solid particles do not move, convection is not possible in solid materials.

Problem 3: What are the processes through which convection occurs?

When transferring heat from one liquid to another through a barrier, convection is essential. Convectional heat transfer occurs either through thermal diffusion (fluid molecule motion) or advection, in which heat is transferred through the bulk motion of heat currents in the fluid.

Problem 4: What does “free” or “natural” convection mean?

The mechanism of heat transmission is considered to be free or natural convection if the fluid motion is caused by a change in density caused by temperature gradients.

Problem 5: Natural or induced convection, which has a higher heat transfer coefficient? What is the reason behind this?

Since the convection heat transfer coefficient is primarily determined by characteristics such as fluid density, velocity, and viscosity, it is generally larger in forced convection than in natural convection.

Previous
Type Of Sets
Next
Fossil Fuels
Related Articles
1. Role of Commerce and Industry Associations in Promotion of Internal Trade
2. What are Chain or Multiple Stores?
3. What are Departmental Stores?
4. Rotation
5. Respiratory Quotient
6. Regulation of Cardiac Activity
7. Public Deposits: Advantages and Disadvantages
8. What is Internal Trade?
9. Rhodophyceae
10. Mosses
Article Contributed By :