Any object which is pushed or pulled by force as a result of its contact with another object. Nothing can be pushed, halted, or changed direction without force. It is the quantitative interaction of two physical bodies, or an item and its surroundings. In nature, there are many sorts of forces.

You’re sitting in your room, reading this. Are you putting any force on the table right now? If that’s the case, what kind of force are you using? Taking a bottle, push it across the table. Have you just used force? What kind of pressure did you use? The bottle being pushed across the table is an example of ‘Applied Forces.’ Let’s take a closer look at the many sorts of forces.

There are primarily two types of forces. They are:

Contact forces are further subdivided into the following categories:

Muscles work together to create a force that is known as muscular force. Muscle force only occurs when it comes into touch with anything. We use muscular force in our daily activities such as breathing, digesting, lifting a bucket, and dragging or pushing an object. Our task is made easier by using muscular force.

Spring force is the force exerted by a compressed or stretched spring. Depending on how the spring is connected, the force generated might be a push or a pull.

When you push a table across the room, you apply a force that acts when it collides with something else. This is referred to as ‘applied force,’ which refers to a force that is applied to a person or object.

There are three types of applied force: push, pull and drag force.

Even if a book appears to be stationary when it is placed on a table, it is not. The book is still being acted upon by an opposing force, that of gravity, which is pushing it towards the ground. This is known as the ‘normal force.’

The force exerted by a completely stretched cable or wire attached to an object is known as tension. This creates a ‘tension force,’ which pulls in both directions and applies equal pressure.

When things move through the air, they are subjected to air resistive forces, which are frictional forces. These forces are inherently resistant.

Non-contact forces are the sorts of forces that may be applied without making contact with any object.

They are further subdivided into the following forces:

Newton’s law of gravity says that “gravitational forces between two bodies are directly equal to the product of their masses and inversely proportional to the square of the distance between them.” Large things, such as planets and stars, exert this force.

Magnetic forces are the sorts of forces exerted by a magnet on magnetic objects. They exist in the absence of any physical interaction between two things. 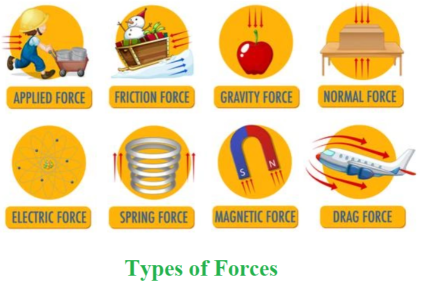 A balanced force is created when two forces are in opposite directions and have the same magnitude. Equilibrium is defined as equal and opposing forces operating on an item while it is not moving.

When two forces operating on a body are of uneven magnitude, this is known as an unbalanced force.

Problem 1: Which is the weakest force in nature?

Gravity is the weakest force as its coupling constant is small in value.

Problem 2: Which force is strongest?

The strongest force is the strong nuclear force which is 100 times stronger than the electromagnetic force.

Problem 3: What is the Line of Action of a Force?

Problem 4: Give any evidence to show that there must be a force acting on earth and directed towards Sun?

The sun rotates around the Earth. This fact requires us to consider a force that can generate the requisite centripetal acceleration to propel the rotation. The gravitational pull between the earth and the sun provides this essential force.

Problem 5: Is it mandatory for an object to move its place when we apply force on it?

According to Newton’s first law of motion, the object tends to be in rest until any external force acts on it. However, the force must be unbalanced in nature, so it is not mandatory for an object to move when the force acts on it.

My Personal Notes arrow_drop_up
Previous
Check if a string consisting only of a, b, c can be made empty by removing substring "abc" recursively
Next
Minimum number of insertions required such that first K natural numbers can be obtained as sum of a subsequence of the array
Recommended Articles
Page :
Balanced and Unbalanced Forces
28, Apr 21
Types of Forces
19, Feb 21
Exploring Forces
19, Feb 21
How to make a HTML link that forces refresh ?
21, Apr 21
Interaction of Forces
18, May 21
Fundamental Forces
24, May 21
Forces Between Multiple Charges
24, Jun 21
Theorem - The tangent at any point of a circle is perpendicular to the radius through the point of contact - Circles | Class 10 Maths
25, Oct 20
How to create previous and next button and non-working on end position using JavaScript ?
15, Nov 20
Metals and Non-Metals - Definition, Properties, Uses and Applications
03, Oct 21
Difference between Preemptive Priority based and Non-preemptive Priority based CPU scheduling algorithms
20, Apr 20
Computable and non-computable problems in TOC
17, Aug 18
Difference between Deterministic and Non-deterministic Algorithms
11, Sep 18
SQL queries on clustered and non-clustered Indexes
01, Oct 18
Difference between Primordial and Non-Primordial Threads
10, Jun 21
Difference between static and non-static method in Java
01, Apr 19
Difference between static and non-static variables in Java
03, Apr 19
Perl | Greedy and non-greedy match
17, Dec 19
Difference between Preemptive and Non-preemptive CPU scheduling algorithms
01, Apr 20
Difference between semantic and non-semantic elements
10, Sep 20
How to Check the Accessibility of the Static and Non-Static Variables by a Static Method?
02, Jan 21
Theorem - There is one and only one circle passing through three given non-collinear points | Class 9 Maths
30, Jan 21
Difference Between Linear and Non-Linear Equations
01, Jan 21
Blocking and Non-Blocking in Node.js
19, May 21
Article Contributed By :