Radiation is the energy or particles that flow through space or other media from a source. Light, heat, microwaves, and wireless communications are all examples of its forms. We will be able to assist you in properly explaining the radiation through this post. Let’s find out what it means, what types it comes in, what uses it has, and so on.

It is the energy or particles that originate from a source and travel via space or other mediums, as you may know. Now let’s take a look at what it all entails: particle, electromagnetic, gravitational, and acoustic radiation.

Ionizing radiation is defined as radiation that creates ions with sufficient energy in matter at the molecular level as a result of collision. It has a charge of more than 10 eV, enough to ionize atoms and molecules and disrupt chemical bonds.

In other words, it can remove tightly bound electrons from its orbit, causing the atom to become more charged or ionized, resulting in significant damage, including DNA damage and protein denaturation, when the interacting matter is a human body.

Ionizing radiation is created by unstable atoms that have either too much energy or too much mass or both. To return to a stable state, they must release the excess mass or energy in the form of radiation in order to revert to their original condition. Microwave, infrared, and radio waves are used to ionize the air. 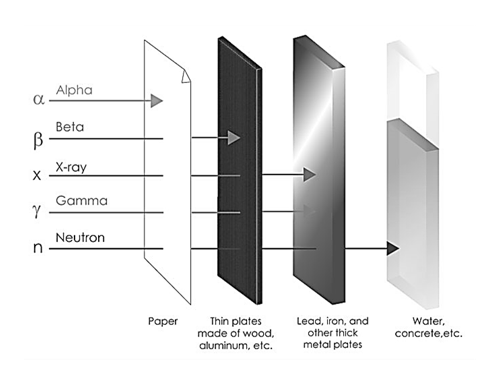 Nuclear radiation is the energy emitted by elementary particles of the atomic nucleus during the nuclear decay process.

It may have serious implications for the environment, human life, and infrastructure according to the International Atomic Energy Agency. Nuclear radiation, on the other hand, maybe useful or dangerous depending on how it is used.

When an unstable atom produces two protons and two neutrons—basically a helium nucleus—alpha radiation occurs. With fewer protons and neutrons, the original atom transforms into a different element. The nuclei of helium-4 (4He) particles are known as alpha particles.

Alpha particles are massive and hefty when compared to other types of ionizing radiation. Because they can’t move very far, they’re valuable in smoke detectors. A piece of paper, your skin, or even just a few inches of air can stop them.

When a proton in an unstable atom produces an electron, this is known as beta radiation. The initial atom changes into a new element after losing a proton. Because beta particles are smaller than alpha particles, they may travel further and penetrate further. In rare cases, beta particles are employed in eye surgery.

They’re divided into two groups: Beta-minus (β-) and Beta-plus (β+). An energetic electron makes up Beta-minus radiation. It penetrates further than alpha but not as deeply as gamma. The emission of positrons, the antimatter version of electrons, is the source of Beta-plus radiation.

Gamma rays, also known as Gamma radiation, are photons having a wavelength of fewer than 0.01 nanometers. After most nuclear reactions, the emission is a nuclear process that happens to rid an unstable nucleus of surplus energy. It can travel great distances at the speed of light. It has also the ability to penetrate deeply into the matter.

It’s a type of electromagnetic wave. X-rays are extremely strong electromagnetic radiation. The wavelength of most X-rays ranges from 0.01 to 10 nanometers, corresponding to frequencies of 30 petahertz to 30 exahertz and energies of 100 eV to 100 keV. Like Gamma rays, they can also travel at the speed of light and can penetrate deeply into the matter.

Emissions of electromagnetic radiation are used in all current communication systems. Its intensity fluctuates to indicate changes in the sound, visuals, or other information that is delivered.

For example, we may broadcast a human voice as a radio wave or microwave by varying the wave to match the voice’s fluctuations. Similarly, musicians work with the sonification of gamma rays to generate sound and song.

Problem 1: What role does X-ray play in the practice of medicine?

X-rays are used by doctors to identify broken bones and cancers that may be present in the body. Furthermore, doctors can detect certain disorders by injecting a radioactive material and monitoring the radiation emitted as the material travels through the body.

It’s a small, heavy particle with a short range. It’s a helium nucleus that has been expelled. Furthermore, it is another name for the alpha particles emitted during alpha decay, a type of radioactive decay. The nuclei of helium-4 (4He) particles are known as alpha particles.

Problem 3: Where does radiation come from?

Radiation can be produced artificially, as in medical X-rays and microwaves for cooking, or it can be naturally present in our environment, as it has been since before the birth of this planet.

Problem 4: Is radiation safe or not?

Radiation is safe when it is used in very small amount. The medical treatments are done with the help of exposure to radiation for a very small interval of time but it’s long time exposure can damage the cells of human body which may leads to death.

Problem 5: What are the types of radiation based on the energy of particles?

There are two types of radiation on the basis of the energy of the radiation particles: Ionization radiation and non-ionization energy.