Waves are an integral part of our earth and nature. Waves are found in nature in many forms such as sound waves, light waves, water waves, radioactive waves, ultraviolet waves, and mechanical waves like transverse waves and longitudinal waves. Energy is transferred through waves. Due to its free movement in nature, many types of properties are found in waves.

Events like a reflection of waves, superposition of waves, displacement of waves, acceleration of waves, etc. A wave is a type of oscillation (disturbance) that flows over time and space. Wave movements move energy from one location to another. Waves play a significant part in our daily lives. This is due to the fact that waves can transport energy and information across long distances. Waves need an oscillating or vibrating source. The first known waves were ocean surface waves. Later, more types were discovered.

So in this article, we are going to learn about the reflection of waves, we will learn how many types of wale reflections are present in nature. how humans use the properties of wave reflection in their daily life.

When a progressive wave hits two boundary surfaces of different densities, it returns to the same medium following certain laws. This phenomenon is called Reflection of the Waves.

Reflection of a Transverse Pulse from a Rigid Boundary

Suppose the end B of a string AB is tied to a rigid base, a wave pulse is sent from its end A from left to right. If the displacement of the particles in this pulse is upward. When this pulse reached a firm base, it exerts a force on the base in an upward direction. Consequently, according to Newton’s third low motion, a firm base that exerts the same reaction force produces a pulse that starts moving in the opposite direction (from right to left) with the help of a string. This is reflected pulse. 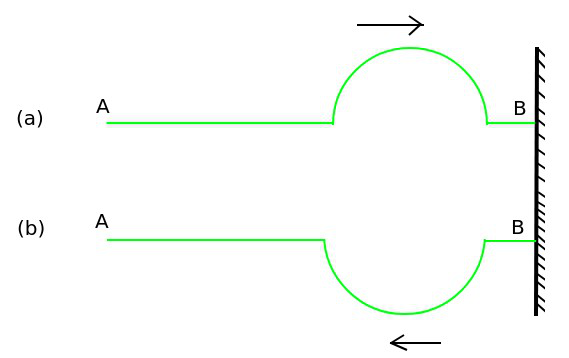 If the equation of the incident wave is,

Reflection of a Transverse Pulse from a Free Boundary

Suppose the end B of the string AB is attached to a small ring which can make frictionless oscillations in a vertical rod. A wave pulse is sent from left to right in the string. Suppose the displacement of the particles of the string is upwards. When this pulse reaches end B, it exerts an upward force on this end B. Hence the ring attached to end B moves upwards.

While returning, this ring crosses the equilibrium position due to inertia. In this case, the ring exerts a reaction force on the string, due to which the same type of pulse starts moving in the opposite direction in the string. Thus, in the incident pulse and the reflected pulse, the particles of the string vibrate in the same direction. It is clear that there is no change in the phase of the incident pulse as a result of reflection from the free boundary. 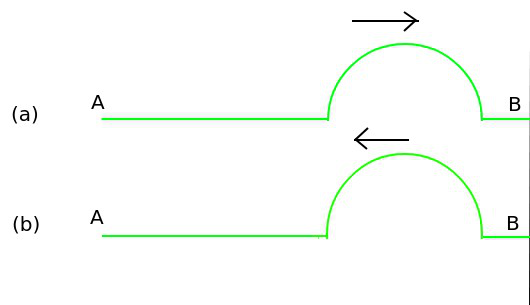 Reflection of the Longitudinal Pulse from Rigid Boundary

As a result, the compression pulse starts moving from end B to end A with the help of spring. In the incident pulse and the reflected pulse, the directions of displacement of the spring particles are opposite. Therefore, in case of reflection from a rigid base, the phase of the incident pulse changes by π or 180°. 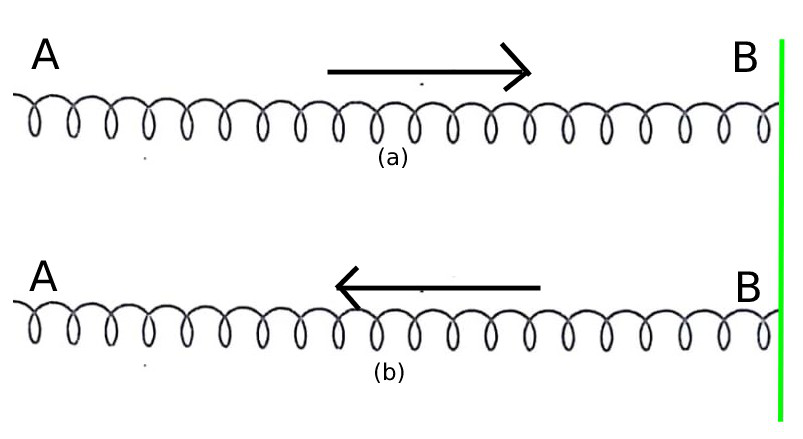 In this situation also, the reflected wave can be represented by equation (1) or (2).

Reflection of the Longitudinal Pulse from the Free Boundary

Let AB be a spring. A compression pulse moves from end A to B i.e. from left to right with the help of spring. When it reaches the free end B, the pulse exerts a force on B from left to right. Due to this force, end B crosses the equilibrium position and moves to the right. Hence, the length of the spring increases, and the rarefaction pulse starts moving from right to left, but still, the direction of displacement of the spring particles remains the same. Therefore, there is no change in its phase due to the reflection of longitudinal pulse from the free boundary.

In this situation also, the reflected wave can be represented by equation (3) or (4).

Application of Reflection of Waves

Problem 1: Name the good and bad reflector or sound waves and also give the name of substance which is an absorber of sound?

Following are the good, bad, and good absorbers of sound waves:

Problem 2: A radar sends a signal to an aircraft at a distance of 70 km away and receives it back after 3×10-2 seconds. What is the speed of the signal?

Problem 3: Mention any two applications of reflection of sound.

Following are the applications of reflection of sound:

Problem 4: Light in the air has a frequency of 6 ×1012 ​Hz. What is the frequency of light when it penetrates water?

Only the velocity and wavelength of light change during refraction. When light enters from air or vacuum, i.e. when light moves from one medium to another, its frequency does not change, i.e. it remains constant.

Problem 5: Define the phenomenon of Resonance.

Resonance is a phenomena in which the inherent frequency of a body equals the frequency of an external periodic force and the amplitude of vibrations becomes very big.