Sound is defined as oscillations or sensations evoked by oscillations in particles. Sound is the energy that travels in waves through the air, water, or another medium. Sound can be heard, and it propagates through air as a longitudinal wave. Sound can neither be created nor be destroyed but can be changed from one form to another. For instance, Sound produced by an electric bell here, electrical energy is converted into sound energy. Sound is produced due to the vibration of an object. 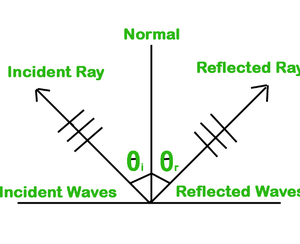 A sound is a form of energy like light energy and heat energy. Sound is a wave made of vibrations in the air. These vibrations create sound waves which move through mediums which can be solid, liquid, or gas, before reaching our ears. Sound does not travel in a vacuum. Sound, therefore, is not audible in space. Just like light, the sound gets reflected at the surface of a solid or liquid. This bouncing back of sound when it strikes any surface is the reflection of sound.

Here are some important terms defined below to understand the reflection of sound in a better way as:

The sound waves necessarily require a medium for their propagation. These waves travel in a medium through the vibrations of the medium particles about their mean positions. Hence, they are called elastic or mechanical waves

The vibrations of medium particles are along the direction of propagation. Compressions and rarefactions are formed in the medium

The vibrations of medium particles are perpendicular to the direction of propagation. Crests and troughs are formed in the medium

Conditions for formation of an echo:

An echo is heard only if the distance between the person producing the sound and the rigid obstacle (or reflector) is long enough to allow the reflected sound to reach the person at least 0.1 seconds after the original sound is heard

Conditions for hearing the echo distinctly:

Use of echoes by bats, dolphins, and fisherman

Use of echoes by sonar (sound navigation and ranging)

Loudness – It is the property by virtue of which a loud sound can be distinguished from a faint one, both having the same pitch and frequency. Loudness is expressed in a unit called decibel (dB). It is directly proportional to the amplitude of vibration.

Intensity – The amount of sound energy passing each second through a unit area is called the intensity of sound.

Pitch – Pitch is that characteristic of sound by which an acute (or shrill) note can be distinguished from a grave or flat note. It is not the same as frequency. It refers to the sensation as perceived by the listener.

Quality / Timbre – The quality or timbre of the sound is that characteristic that enables us to distinguish one sound from another having the same pitch and loudness, but emitted by two different instruments.

Factors affecting the loudness of sound

The reflection of sound is similar to the reflection of light as it follows the laws of reflections. As a sound wave travels across a room and touches a wall, a reflective wave is produced that will reintroduce a portion of that wave back into the room.

Sound Transmission occurs with the portion of energy that can transmit through the wall. The sound wave is transferred as energy from molecule to molecule through either medium. Sound Reflection is the energy that is returned to the original medium.

Laws of Reflection of Sound

Applications of reflection of sound

Reflection of sound is used in many devices:

Problem 1: Does sound follow the same laws of reflection as light does? Explain.

Yes, sound and light follow the same laws of reflection given below :

(b) At the point of incidence, the incident sound wave, the normal and the reflected sound wave lie in the same plane.

Problem 2: How does the sound produced by a vibrating object in a medium reach your ear?

Air is the commonest material through which sound propagates. When vibrating objects, like prongs of a tuning fork move forward, they push the molecules of the air in front of them. This in turn compresses the air, creating a region of high pressure and high density called compression. When the prongs of the tuning fork move backward, they create a region of low pressure in the air called rarefaction. This region has low pressure, low density and more volume. As the tuning fork continues to vibrate, the regions of compression in the air alternate with the regions of rarefaction. The energy of vibrating tuning fork travels outward. This energy which reaches the ears, makes the eardrums to vibrate, and thus we hear sound.

Problem 3: How does the sound produced by a musical instrument, reach your ears? Astronauts need radio transmitters to talk to each other on the moon. Why?

The sound produced by the musical instrument makes the molecules of air vibrate. These vibrations are carried forward by the other molecules till they reach our ear and then vibrate our eardrum to produce sound. Since sound requires a medium to propagate, therefore, sound cannot travel between astronauts on the moon, hence they use radio transmitters.

Problem 5: Sound made in front of a tall building 18 m away is repeated. Name the phenomenon and briefly explain it.

Problem 6: Explain how sound is produced by your school bell.

When the school bell vibrates, it forces the adjacent particles in air to vibrate. This disturbance gives rise to a wave and when the bell moves forward, it pushes the air in front of it. This creates a region of high pressures known as compression. When the bell moves backwards, it creates a region of low pressure know as rarefaction. As the bell continues to move forward and backward, it produces a series of compressions and rarefactions. This makes the sound of a bell propagate through air.

Problem 7: The frequency of a source of sound is 100 Hz. How many times does it vibrate in a minute?

Frequency is defined as the number of oscillations per second. It is given by the relation.

Hence, the source vibrates 6000 times in a minute, producing a frequency of 100 Hz.

Problem 8: When a sound is reflected from a distant object, an echo is produced. Let the distance between the reflecting surface and the source of sound production remains the same. Do you hear echo sounds on a hotter day?

Previous
Quotient Rule
Next
Logarithmic Differentiation - Continuity and Differentiability
Related Articles
1. Reflection and Laws of Reflection
2. What are the Characteristics of Sound Waves?
3. How is Sound Produced by Humans?
4. Speed of Sound
5. Sound Needs a Medium for Propagation
6. Sound Produced by a Vibrating Body
7. Sound Intensity Formula
8. Sound Pressure Level Formula
9. How to calculate the Wavelength of Sound?
10. Production and Propagation of Sound
Article Contributed By :