In this article, we are going to see how to delete the specific lines from a file using Python

Throughout this program, as an example, we will use a text file named months.txt on which various deletion operations would be performed. 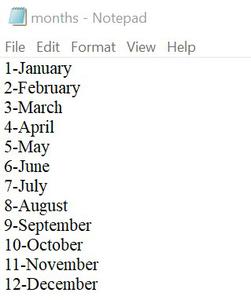 In this method, the text file is read line by line using readlines(). If a line has a position similar to the position to be deleted, it is not written in the newly created text file.

‘5-May’ was written on the 5th line which has been removed as shown below: 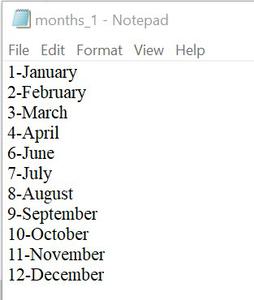 Method 2: Deleting a line using a text that matches exactly with the line

In this method, after reading the file, each line is checked if it matches with the given text exactly. If it does not match, then it is written in a new file.

The line having ‘8-August’ exactly has been removed as shown: 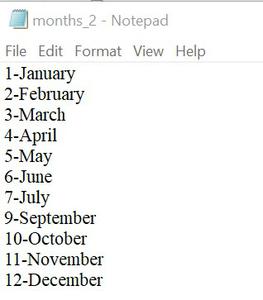 Here, the lines containing the specified string pattern are removed. The pattern may not be necessarily the whole exact line. 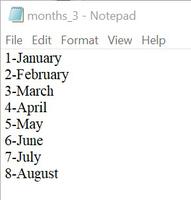 Example 2: Deleting lines with the condition

If we have a condition that the lines in our file must have a minimum length. So, the following example shows how to delete lines not having a minimum specified length.

All the lines not having a length of greater than or equal to 7 have been removed: 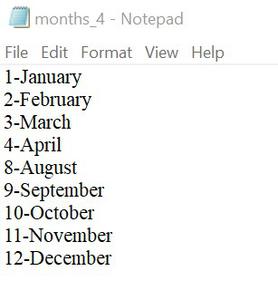 My Personal Notes arrow_drop_up
Previous
Python Script to Automate Refreshing an Excel Spreadsheet
Next
Scraping Reddit using Python
Recommended Articles
Page :
Python Program to Replace Specific Line in File
11, Sep 21
Java Program to Read a Large Text File Line by Line
17, Jun 21
Read a file line by line in Python
21, Nov 19
How to read a file line by line using node.js ?
19, May 20
How to Read a File Line by Line to String in Golang?
11, Jun 20
How to read a Large File Line by Line in PHP ?
12, Jul 21
How to Delete a Specific Row from SQLite Table using Python ?
25, Apr 21
How to delete file from the firebase using file url in node.js ?
16, Dec 20
Python Program to delete a file
18, Jun 19
How to read specific lines from a File in Python?
10, Dec 20
Python program to Reverse a single line of a text file
10, Mar 20
Compare two Files line by line in Python
16, Feb 21
How to import excel file and find a specific column using Pandas?
01, Sep 20
Reading specific columns of a CSV file using Pandas
20, Oct 20
How to read Excel file and select specific rows and columns in R?
12, May 21
Delete the array elements in JavaScript | delete vs splice
17, May 19
Which one method use to delete an element from JavaScript array (slice or delete) ?
07, Oct 21
Python program to reverse the content of a file and store it in another file
15, Jan 20
Delete a directory or file using Python
26, Nov 19
How to delete data from file in Python
17, Jan 20
How to delete a CSV file in Python?
13, Jan 21
How to delete from a pickle file in Python?
22, Jan 21
PyQtGraph - Setting Symbol of Line in Line Graph
16, Sep 20
PyQtGraph - Setting Shadow Pen of Line in Line Graph
16, Sep 20
Article Contributed By :