When an external force operates to conduct work, such as moving a body from one location to another against a force like spring force or gravitational force, the work is gathered and stored as potential energy in the body. When an external force is removed, the body moves, acquiring kinetic energy and losing potential energy in equal amounts. As a result, the total kinetic and potential energy are conserved. Conservative forces are those who belong to this group. Spring force and gravitational force are two examples of these forces.

Coulomb force is a conservative force between two (stationary) charges. Both have an inverse-square relationship on distance and differ only in the proportionality constants. The masses in the expression of gravitational law are replaced by charges in Coulomb’s law expression. Thus, like the potential energy of a mass in a gravitational field, the electrostatic potential energy of a charge in an electrostatic field is defined.

Assume that the charge q does not affect the sources that generate the external field. This is true if q is very tiny, or if unspecified forces hold the external sources in place. Even if q is limited, its impact on external sources may be overlooked in the case of extremely powerful sources far away at infinity producing a finite field E in the region of interest.

This work is stored in the form of the potential energy of q. If the point P has position vector r relative to some origin can be written as,

where V(r) is the external potential at point r.

This unit of energy is defined as 1 electron volt or 1eV,

The potential energy of a system of two charges q1 and q2 located at r1 and r2, respectively, in an external field. To begin, compute the amount of work required to get the charge q1 from infinite to r1. q1 V(r1) is the work done in this step. After that, the work that went into getting q2 to r2. Work is done against the external field E and the field created by q1 in this phase.

where r12 is the distance between q1 and q2. By the superposition principle for fields, add up (equation (1) and equation (2))the work done on q2 against the two fields (E and that due to q1 ).

Thus, Potential energy of the system = the total work done in assembling the configuration 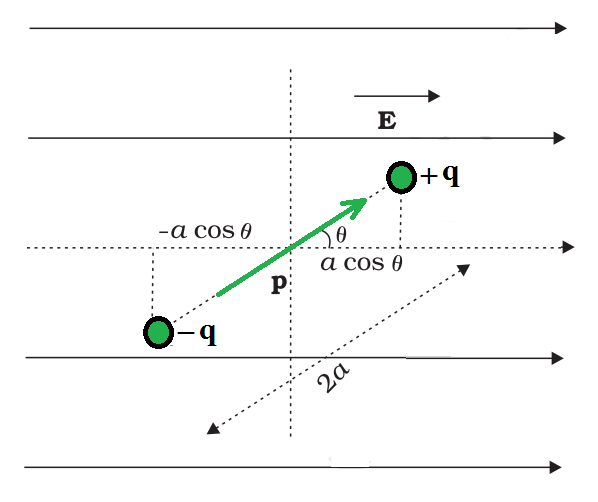 The potential energy of a dipole in a uniform external field.

Suppose a dipole with charges q1 = +q and q2 = –q is placed in a uniform electric field E. The dipole feels no net force in a homogeneous electric field but does experience a torque defined as

which will tend to rotate it. Assume that an external torque τext is applied in such a way that it simply neutralizes the torque and rotates it in the plane of paper at an infinitesimal angular speed and without angular acceleration from angle θ0 to angle θ1. The amount of work done by the external torque can be written as,

This expression can alternately be understood also from Equation (3).  apply   Equation (3) to the present system of two charges +q and –q.

The location vectors of +q and –q is denoted by r1 and r2. The work done in transporting a unit positive charge against the field from r2 to r1 is now equal to the potential difference between positions r1 and r2. 2a×cosθ is the displacement parallel to the force.

Note that, U′(θ) differs from U(θ) by a quantity which is just a constant for a given dipole.

Consider any static charge setup in general. The potential energy of a test charge q is defined in terms of the work done on it. Because the force at any place is qE, where E is the electric field at that point due to the given charge arrangement, this work is obviously proportional to q. As a result, it is convenient to divide the work by the amount of charge q, resulting in a quantity that is independent of q. In other words, work done per unit test charge is representative of the electric field linked with the charge configuration. This reaches the idea of electrostatic potential V due to a given charge configuration. The Work done by external force in carrying a unit positive charge from point R to P can be expressed as,

“The work done by an external force to carry a unit positive charge from infinity to a location is equal to the electrostatic potential (V) at that point.”

In other words, the electrostatic potential (V ) at any location in an area with an electrostatic field is the work required to transport a unit positive charge from infinity to that location (without acceleration). Electric potential energy is a scalar quantity with no direction and only magnitude. It is symbolized by V and has the dimensional formula ML2T-3A-1.

Problem 1: Derive an expression for the total work done in rotating an electric dipole through an angle θ in a uniform electric field?

The expression for the torque can be written as,

If an electric dipole is rotated through an angled against the torque acting on it, then small amount of work done is

For rotating through on angle θ, from 90o,

Problem 2: A system consisting of two charges 8 µC and –6 µC (and with no external field) placed at (–9 cm, 0, 0) and (9 cm, 0, 0) respectively. Determine how much work is required to separate the two charges infinitely away from each other?

The expression for the potential energy of a system of two charges q1 and q2 can be written as,

Problem 3: Two charged conducting spheres of radii a and b are connected to each other by a wire. What is the ratio of electric fields at the surfaces of the two spheres? Use the result obtained to explain why charge density on the sharp and pointed ends of a conductor is higher than on its flatter portions.

There fore the equation (1) can be expressed as,

Capacitance of a parallel plate capacitor is given by the relation,

Hence, the area of the plates is too large. To avoid this situation, the capacitance is taken in the range of µF.

Problem 5: What is the work done in moving a test charge q through a distance of 1 cm along the equatorial axis of an electric dipole?

Since potential for equatorial axis is  zero that is

Problem 6: Define the term ‘potential energy of charge ‘q’ at a distance V in an external electric field.

It is defined as the amount of work done in bringing the charge from infinity to its position in the system in the electric field of another charge without acceleration.

Problem 7: A hollow metal sphere of radius 5 cm is charged such that the potential on its surface is 10 V. What is the potential at the center of the sphere?