Amplitude, Time Period and Frequency of a Vibration

Sound is a form of energy generated by vibrating bodies. Its spread necessitates the use of a medium. As a result, sound cannot travel in a vacuum because there is no material to transfer sound waves. Sound vibration is the back and forth motion of an entity that causes the sound to be made. That is often referred to as oscillatory motion.

What are the Oscillations?

The oscillation is the usual rhythmic back and forth movement. Sound travels from one location to another in the form of waves, which are caused by the movement of objects in the medium. A wave is a phenomenon or disruption in which energy is transmitted from one point to another without physical interaction. As a result, the sound is regarded as a wave.

Each vibration or oscillation has three main characteristics: Amplitude, time period, and frequency are discussed deeply in the below section: 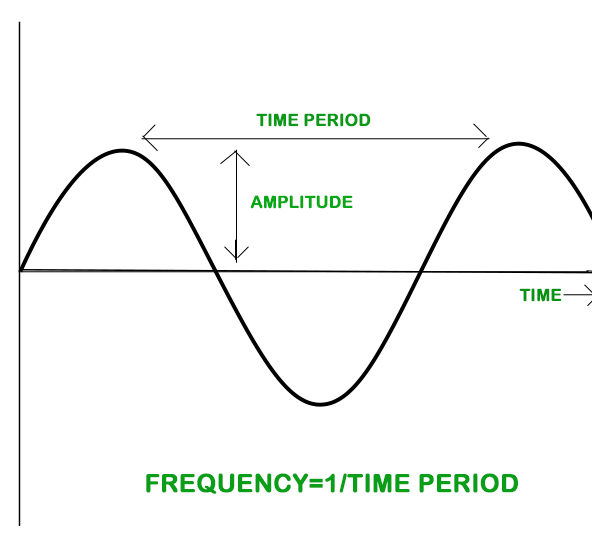 The amplitude of the wave is the frequency of the maximum disruption of particles in the medium on either side of the mean value.

The letter A is commonly used to represent it.

The time it takes to complete one vibration in the depth of the medium is referred to as the sound wave’s time cycle.

The relation between time period (T) and frequency (f) is,

It is denoted by the letter T.

Its SI unit is the second (s).

The frequency of a sound wave is defined as the number of vibrations per unit of time.

It is represented by the letters f or v.

The SI unit of frequency is Hertz (Hz).

Problem 1: Why does an empty vessel produce a louder sound than a filled one?

Problem 2: What type of wave is sound?

1.Longitudinal Sound Waves: A longitudinal wave is a wave in which the motion of the medium’s particles is parallel to the direction of the energy transport.

2. Mechanical Sound Waves: A mechanical wave is a wave that depends on the oscillation of matter, meaning that it transfers energy through a medium to propagate

3.Pressure Sound Waves: A pressure wave, or compression wave, has a regular pattern of high- and low-pressure regions. Because sound waves consist of compressions and rarefactions, their regions fluctuate between low and high-pressure patterns.

Problem 3: A person is listening to a tone of 600 Hz sitting at a distance of 550 m from the source of the sound. What is the time interval between successive compressions from the source?

The time interval between two successive compressions is equal to the time period of the wave. This time period is reciprocal of the frequency of the wave and is given by the relation

Problem 4: Explain the working and application of a SONAR. 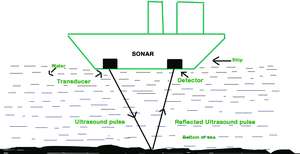 An Ultrasonic sound wave is produced by the transducer of the SONAR, which propagates through any medium (seawater). The wave when hits a surface, is reflected and detected by the sonar detector. The distance of the surface can be calculated as:

where d is distance, v is velocity of sound, t is time.

This method of measuring distance is also known as ‘echo-ranging’. The result is 2d because the wave covers d distance when outgoing and d distance again when coming back after reflection.

Problem 5: Describe how compressions and rarefactions are produced in the air near a source of the sound.