In physics, there are mainly two types of quantities – Vectors and Scalars. Vectors are quantities that have both direction and magnitude associated with them while scalars are the quantities that have the only magnitude associated with them. Scalar quantities can be dealt with using simple algebraic rules but this is not the case with vector quantities, they cannot be dealt with in the same way. Thus, It is essential to know what kind of and how many different operations can be performed on these quantities. Let’s look at some of these operations in detail.

Since vectors contain directions, these quantities should be dealt with in ways that take into account their directions. The basic rules of algebra do not apply in general for vectors, for example – a simple addition of the magnitudes of the two vectors will give the wrong answer in most cases. The following list is the list of some of the common operations that are performed on vectors in the field of physics:

Vectors cannot be added by usual algebraic rules. While adding two vectors, the magnitude and the direction of the vectors must be taken into account. Triangle law is used to add two vectors, the diagram below shows two vectors “a” and “b” and the resultant calculated after their addition. Vector addition follows commutative property, this means that the resultant vector is independent of the order in which the two vectors are added. 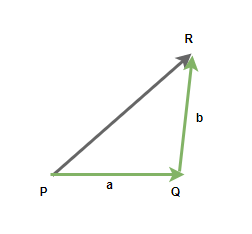 The magnitude of the resultant vector is given by,

represents the angle between the two vectors. Let \phi be the angle made by the resultant vector with the vector p.

Multiplication of Vectors with Scalar

Multiplying a vector a with a constant scalar k gives a vector whose direction is the same but the magnitude is changed by a factor of k. The figure shows the vector after and before it is multiplied by the constant k. In mathematical terms, this can be rewritten as,

if k > 1, the magnitude of the vector increase while it decreases when the k < 1.

. The scalar product of these two vectors is defined by the equation,

Here, θ is the angle between two vectors.

Consider two vectors \vec{A} and \vec{B} . The vector product of these two vectors is denoted by

Here, θ is the angle between two vectors.

The right-hand rule is used to determine the direction of the resulting vector from the cross-product. Note that unlike the addition and dot product, the vector product is not commutative in nature.

Question 2: Two vectors with magnitude 5 and 10. These vectors have a 60° angle between them. Find the magnitude of the resultant vectors.

Let the two vectors be given by p and q. Then resultant vector “r” is given by,

Let the two vectors be given by p and q. Then resultant vector “r” is given by,

angle made by the resultant, 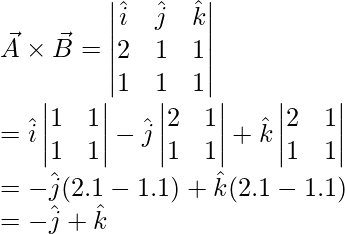