How to deploy React app to Surge ?

React is a very popular and widely used library for building User Interfaces. So if you are thinking about deploying your Static React app then we can use the surge package, Publish web apps to a CDN with a single command and no setup required.

Surge: There are some free tools to host our website available like GitHub and Heroku but the setup is a little complicated when it comes to publishing the front-end only. For such a scenario we can use Surge. It is a popular npm library used to deploy static web pages with just a single command. First, we create a build of our project and then we write surge command on the terminal inside the build folder. We can even choose a custom name for our project.

Note: If you’ve previously installed create-react-app globally via npm, directly use the command below:

Your development environment is ready. Let us now install surge in our Application.

Step 2: After creating your project folder i.e. styled, move to the same folder: 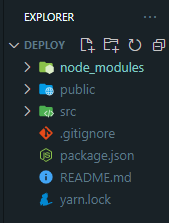 Step 4: Now create a dummy project and put the following code into your App.js file.

Step 5: Now you need to make a build folder so that you can deploy your React App. Build basically bundles and minifies our code and this folder consists of compiled React which boils down to simple Html, CSS, and JavaScript.

Step 6: Now we can host and deploy our React App. Now you have ‘surge’ globally installed in your system so that you will be able to use it as many times as you want in the future. Execute the following command:

Step 7: It will now ask for your email ID and a password (if you are using it for the first time). Here you need to enter your email id and a new password for your surge account.

If you are already logged in you will see the following:

Step 8: After that, you need to give a location to your static files(i.e build folder). If you opened the terminal in the same folder as instructed, hit enter.

Step 10: Now hit enter and you will get the link to your site published over the web.

Output: Now if you open the URL you can see the following output, or you can visit this link to check the hosted React App dapper-food.surge.eh

As we can see the process of hosting a static website on the surge is very easy. We can host our website using just 2 commands on surge.

My Personal Notes arrow_drop_up
Previous
Which contextual classes are used with progress bars in Bootstrap ?
Next
How to ping a server using JavaScript ?
Recommended Articles
Page :
How to Deploy Next.js App to Vercel ?
12, Jul 21
How to deploy simple frontend server-less (static) React applications on Netlify
28, Sep 21
Building a react boilerplate from scratch without using create-react-app
20, Sep 21
How to optimize the performance of React app ?
10, Feb 22
What's the typical flow of data like in a React with Redux app ?
18, Jul 21
React.js Pokémon App.
28, Sep 21
How to add theme to your React App?
10, Mar 21
How to add dual theme to your React App ?
30, Mar 21
Build a Basic React App that Display “Hello World!”
29, Sep 21
What are the advantages of using create-react-app CLI ?
21, Oct 21
How to specify a port to run a create-react-app based project ?
28, Oct 21
How to view React App in a different devices ?
27, Feb 22
How to migrate from create react app to Next.js ?
21, Mar 22
React animated loading/splash screen using 'react-spinners'
29, Jun 21
Difference between React.Component and React.PureComponent?
27, Jan 21
Implement Nested Routes in React.js - React Router DOM V6
27, Feb 22
How to import from React-Select CDN with React and Babel ?
15, Mar 22
Adding spinners using react-spinners-kit package in React.js
30, Apr 22
ReactJS | Calculator App ( Styling )
26, Mar 18
How to build a basic CRUD app with Node.js and ReactJS ?
21, Sep 21
How to trigger animations in a ReactJS app based on the scroll position ?
24, Mar 22
Random Quote Generator App using ReactJS
24, Sep 21
How to create a Location finder app using ReactJS ?
02, Oct 21
How to log-out user from app using ReactJS ?
08, Mar 22
Article Contributed By :