Thermodynamic rules are straightforward to state. Do you aware that thermodynamics principles apply to the human body? When we’re in a room full of people, we start to sweat and feel heated, and if a room is tiny, the perspiration becomes excessive. This occurs because your body is attempting to cool itself, and heat is transferred from the body through perspiration. This necessitates the application of the first law of thermodynamics.

We must first comprehend a relationship between work and heat, as well as an idea of internal energy, before moving on to the first law of thermodynamics. Energy, like matter, is always conserved, meaning it cannot be generated or destroyed but may be converted into different forms. A thermodynamic property cites the energy which is related to the system’s molecules, including potential and kinetic energy is called the internal energy of a system.

When a system changes as a result of the relation of work, heat, and internal energy, multiple energy transfers and conversions occur. However, the net change in total energy throughout these exchanges is zero. In the same way, the first law of thermodynamics explains that heat is a type of energy. It means that the principle of energy conservation governs thermodynamic processes. The Law of Conservation of Energy is another name for the fundamental law of thermodynamics.

What is the First Law of Thermodynamics?

The first law of thermodynamics states that the total energy of an isolated system is constant. Energy can be transformed from one form to another, but can neither be created nor destroyed. 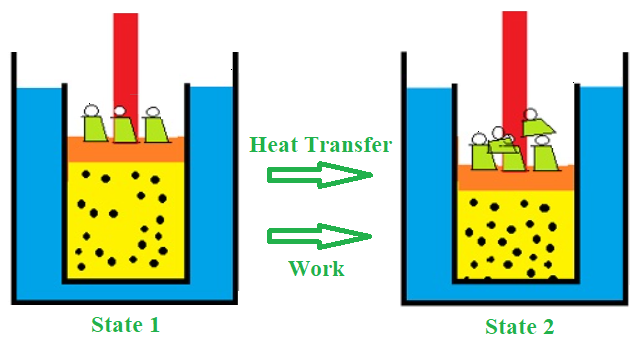 The first law of thermodynamics.

Internal energy is a state variable in a thermodynamic system that is in equilibrium. The internal energy difference between the two systems is equal to heat transfer into the system minus work done by the system.

According to the first rule of thermodynamics, the universe’s energy does not change. It can be transferred between the system and the surroundings, but it cannot be produced or destroyed. The law is primarily concerned with energy states as a result of work and heat transmission. It reinterprets the notion of energy conservation.

We may use the popular example of a heat engine to help you grasp the meaning of the First Law. Thermal energy is transformed into mechanical energy in a Heat engine, and the process is also reversed. The majority of heat engines are classified as open systems. A heat engine’s primary working concept is to take advantage of the many interactions between heat, pressure, and volume of a working fluid, which is generally a gas. It’s not uncommon for gas to turn into a liquid and then back to a gas.

According to this rule, some heat supplied to the system is utilized to modify the internal energy, while the remaining is utilized by the system to perform work. Mathematically,

It is impossible to build a machine that can do mechanical work indefinitely without spending any energy. The perpetual motion machine of the first type is a hypothetical device like this. These machines contradict the first rule of thermodynamics and do not exist in the actual world.

First Law of Thermodynamics for a Closed System

The product of the pressure applied and the change in volume that happens as a result of the applied pressure is the work done for a closed system:

This is referred to as Pressure-Volume work.

There are four processes involved in the closed system:

Problem 1: Find out the internal energy of a system that has constant volume and the heat around the system is increased by 30 J?

Hence, the change in internal energy of the system is 30 J.

Problem 2: Calculate the change in the internal energy of the system if 2000 J of heat is added to a system and a work of 1500 J is done.

Hence, the change in internal energy of the system is 500 J.

Problem 3: What is the significance of the first law of thermodynamics to the environment?

Energy cannot be generated or destroyed, according to the first law; it can only be changed from one form to another. All living species on Earth rely on the sun for their energy. Photosynthesis is the process through which plants transform solar energy into chemical energy. These energies are not returned to the solar system by the plants; instead, they are passed on to herbivores that eat green vegetation. Carnivores use some energy gained by herbivores, while some energy obtained by herbivores is passed to decomposers when the herbivores die.

The First Law of Thermodynamics states that heat is a form of energy, and thermodynamic processes are therefore subject to the principle of conservation of energy. This means that heat energy cannot be created or destroyed. It can, however, be transferred from one location to another and converted to and from other forms of energy.

Problem 5: A gas in a closed container is heated with 20J of energy, causing the lid of the container to rise 3 m with 4 N of force. What is the total change in energy of the system?

We are not given a value for work, but we can solve for it using the force and distance. Work is the product of force and displacement.

Hence, the change in internal energy of the system is 8 J.