Every wave carries energy. The energy of some waves, such as earthquake energy, maybe directly seen. Similarly, wave energy manifests itself in the churning of the coastline by sea waves and the pulverisation of nerve cells caused by strong noises. This article will look at the quantitative representation of energy in waves. In addition, we will learn what gives waves their energy and how amplitude and frequency connect to wave energy.

Wave motion is defined as the transmission of energy and momentum from one medium point to another without the actual transport of matter between the two sites. There are three distinct ways to classify wave motion:

The conveyance and collection of energy by ocean surface waves are known as wave energy (or wave power). The captured energy is subsequently used for a variety of tasks, including electricity generation, water desalination, and water pumping. Wave energy is a sort of renewable energy that is projected to be the world’s largest ocean energy resource.

What is the Wave Motion?

Wave motion is defined as the transmission of energy and momentum from one point in a medium to another without the actual transfer of substance between the sites.

Waves cause disruption as a function of time, and this function is referred to as the wave function. In the case of a string, it could be particle displacement, and in the case of sound waves, it could be a change in pressure or density.

A wave’s energy is determined by two factors. The first is amplitude, which is the distance between a wave’s rest point and its top or bottom. Waves with a large amplitude contain more energy. The other factor is frequency, which is defined as the number of waves passing through each second.

The amplitude and frequency of a wave are connected to the amount of energy it contains. Earthquakes with enormous amplitudes cause massive ground displacements. Loud sounds have larger amplitude source vibrations and higher pressure amplitudes than mild sounds. The coastline is churned up more by large ocean breakers than by minor ones.

The following are some of the benefits of wave energy:

Relation between the Energy of a wave and Amplitude 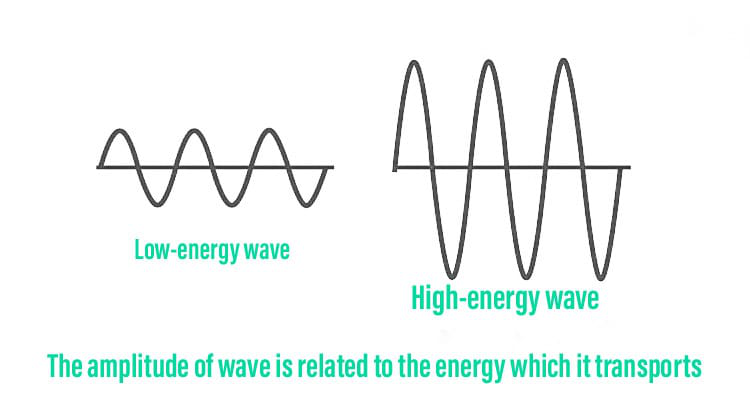 Formula for Energy of a Wave

Take a look at the sinusoidal wave in the diagram. The amplitude and frequency of a wave determine its energy. Energy comes in two forms: kinetic and potential.

Consider a string mass element with a mass of m. Because the string’s linear density is constant, each mass element has the same mass.

The sum of the wave’s kinetic and potential energy is its total mechanical energy. The kinetic energy is expressed as,

Thus, the total energy is given by,

Problem 1: What are mechanical waves?

Problem 2: A string with a mass of 2.50 kg is under 200 N of stress. The stretched string is 20.0 meters long. How long does it take for the transverse jerk to reach the opposite end of the string if it is struck at one end?

The velocity (v) of the transverse wave in the string is given by the relation:

∴ Time taken by the disturbance to reach the other end,

The stone’s starting velocity is u = 0. (since the stone is initially at rest)

t1 is the time it took for the stone to fall to the tower’s base.

As a result, after some time, the splash can be heard from the top.

Problem 4: Give a brief definition of wavelength.

Problem 5: (i) Do all the points on a string oscillate at the same (a) frequency, (b) phase, and (c) amplitude for a wave on a string? Explain your responses.

We know that, l = 1.5 m and l = 3 m for the wave on the string specified in questions. As a result, it is evident that = /2 is only conceivable for a string clamped at both ends if both ends act as nodes and there is only one antinode in between, i.e. the entire string vibrates in one segment.

(a) Yes, except for nodes, all ring particles vibrate at the same frequency of 60 Hz.

Problem 6: What are the seven different types of waves?

From the largest wavelength to the smallest, the electromagnetic spectrum contains radio waves, microwaves, infrared, optical, ultraviolet, X-rays, and gamma-rays

Problem 7: How is energy of wave is related to amplitude?

The square of a wave’s amplitude is related to the quantity of energy it carries. As a result, whatever amplitude change takes place has an effect on the energy. When the amplitude is twice, this amounts to a quadrupling of energy.