While solving and finding the Area of a Triangle, Certain parameters are expected to be provided beforehand, for example, the height and the base of the triangle must be available Or in case of an Equilateral Triangle, the lengths of the side should be given.

Area of triangle is usually given by,

Where base and height are measured from the given triangle. But sometimes it might happen that we don’t have that information. Suppose we only have information about the length of the sides. Height is not known, how will the area be calculated then?

The answer to this question is Heron’s formula.

Heron was born in Egypt in about 10AD. He was a great mathematician, he worked in applied mathematics. His great deal of work revolved around squares, rectangles. This formula is also called “Hero’s Formula”.

Heron’s Formula is also known as Hero’s formula, it is named after a very famous engineer of Egypt, He was famous and known as the “Hero of Alexandria”, His famous works include Heron’s formula, Vending machine, etc. The best part about Heron’s formula was that it did not require any angle or distance prior to solving the area of any Triangle.

Then the area of that triangle as given by Heron,

Where a, b and c are the length of the sides and s = semi-perimeter (Half of the perimeter)

This formula allows us to calculate the area of the triangle where the length of the altitude is not given.

Application of Heron’s Formula in Finding Area of Triangles

Heron’s Formula can be used to find areas of different types of triangles if the length of their sides is given,

Area of this triangle can be calculated by Heron’s formula studied above,

Plugging the values of s, a, b and c in the formula. Let’s calculate the area.

Thus, the area of the triangle is 6 square units.

Application of Heron’s Formula in Finding Area of Quadrilaterals

We know how to calculate the area of standard quadrilaterals like rectangles, squares, and trapeziums. But sometimes it might happen that our quadrilaterals are not in any of these forms. 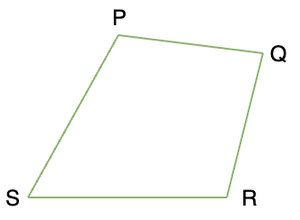 The quadrilateral given above doesn’t lie in any of these categories, so our standard formulas cannot be used. Heron’s formula helps us in such cases. We can join any two opposite vertices in the above figure and can form two triangles. Then the area can be calculated. Let’s see some examples regarding that.

Question: Find the area of the given rhombus using Heron’s Formula. 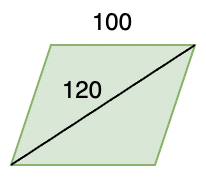 There are two triangles here, both of them are similar.

Thus, semi perimeter for both the triangles is, 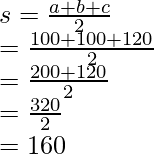 Now, calculating the area of the triangle

Let’s see some sample problems on these concepts,

Sample Problems based on Heron’s Formula

Question 1: There is concrete space in the shape of a triangle that needs to be tiled. The cost of tiling is Rs 20 per square unit. Find the total cost of tiling the area. 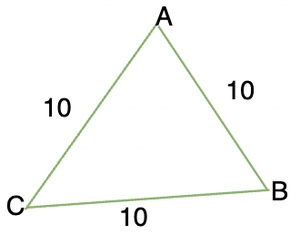 We know the area of the triangle using Heron’s formula.

Question 2: The length of sides of a triangle is in ratio 3:5:4 and the perimeter is 96m. Find the area of the triangle.

Let’s find out the perimeter and semi perimeter so that we can plug in the values in Heron’s formula.

Plugging in the values in Heron’s Formula.

Question 4: Find out the area of the quadrilateral given below: 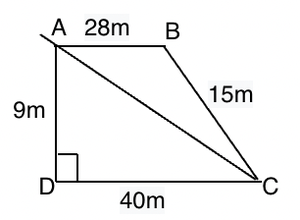 The quadrilateral ABCD can be divided into two triangles whose area we can compute if we join A and C.

Now we have triangles ACD and ABC. Out of which ACD is a right-angled triangle.

Area of triangle ABC will be calculated using Heron’s Formula. The sides of the triangle are 28,15 and 41.

Comparing both sides of the equation, 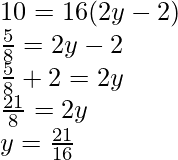