ActionBar in Android with Example

In Android applications, ActionBar is the element present at the top of the activity screen. It is a salient feature of a mobile application that has a consistent presence over all its activities. It provides a visual structure to the app and contains some of the frequently used elements for the users. Android ActionBar was launched by Google in 2013 with the release of Android 3.0(API 11). Before that, the name of this top most visual element was AppBar. AppBar contains only the name of the application or current activity. It was not very much useful for the users and developers also have negligible option to customize it.

Google announced a support library along with the introduction of ActionBar. This library is a part of AppCompat and its purpose is to provide backward compatibility for older versions of Android and to support tabbed interfaces. All applications that use the default theme provided by the Android(Theme.AppCompat.Light.DarkActionBar), contains an ActionBar by default. However, developers can customize it in several ways depending upon their needs. Components included in the ActionBar are:

The following example demonstrates the steps involved in creating a custom ActionBar for the MainActivity of an application. All important aspects of visual elements like icon, title, subtitle, action buttons, and overflow menu will be covered.

As mentioned earlier, every android app contains an ActionBar by default. This pre-included ActionBar display title for the current activity that is managed by the AncdroidManifest.xml file. The string value of the application’s title is provided by @string/app_name resource present under the application nodes.

Step 2: Creating a new directory and design items of ActionBar

To code the elements of ActionBar, create a new directory in the resource folder of the application project files. Right-click on the res folder and selects New -> Directory. Give the name “menu” to the new directory.

Further, create a new Menu Resource File by right click on the menu directory. As the ActionBar is being created for the main Activity, type the name as “main” to the Menu Resource File. With this, a new file named “main.xml” must be created under the menu directory. In this file, one can declare the items which will be displayed as the action buttons of the ActionBar. 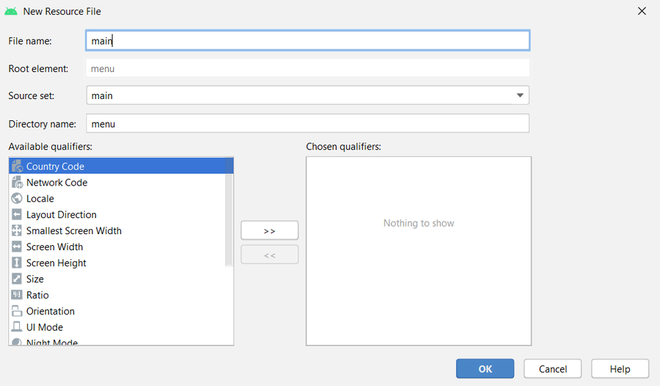 For every menu items, the following attributes are needed to be configured:

Icon of an ActionBar Item

In order to provide an icon to an item, right-click on the res folder, select new, and then Image Asset. A dialog box will appear, choose the Icon Type as Action Bar and Tab Icons. Choose assets type as “Clip Art” and select an image from the clip art collection. Provide a desired name to the icon. Click on Next, then Finish. This icon will now get loaded in the drawable directory of the res folder. The name provided by the developers to these icons will now be used to reference the item’s icon resource.

Below is the code to place a search icon, refresh icon, and an overflow menu in the ActionBar.

Step 3: Working with the Activity File

The items of an ActionBar is designed with a purpose to perform some operations. Those operations/actions of the items are declared in that Activity file for which the ActionBar has been designed. In this example, the target activity is the MainActivity file. Further, the custom title, subtitle, and application logo are also defined in this file. Below is the proper code to design all mentioned items and to display a toast message when a user clicks on the items of ActionBar.

Step 4: Color of the ActionBar

Head over to style.xml file located in the values directory of the res folder. To change the default color of the ActionBar, one has to change the colorPrimary resource. Below is the code to make the ActionBar color ‘green’.

This file defines the layout of the activity. In this example, the prime focus is on ActionBar, thus the activity will contain only a simple TextView. Below is the code.

Note: To resolve all the problems related to ActionBar, Google introduced ToolBar along with the release of API 21(Android Lollipop).