Linear Momentum of a System of Particles

Linear Momentum of System of Particles

We know that the particle’s linear momentum is:

where p represents the particle’s momentum.

For a single particle, Newton’s second law is:

where F represents the particle’s force.

The total linear momentum of ‘n‘ particles is:

The velocity of the centre of mass is expressed as:

So, when we compare these equations, we get:

As a result, we may state that, a system of particles’ total linear momentum is equal to the product of the system’s total mass and the velocity of its Centre of mass.

Differentiate the above equation:

dV ⁄ dt is the acceleration of the centre of mass.

Assume A be the acceleration of the centre of mass.

This equation is just Newton’s second law applied to a system of particles. If the total external force operating on the system is zero, the system is said to be in equilibrium.

P = constant, as a result of this.

If there is no external force, the individual particles’ momenta may fluctuate, but their total remains constant. The term “momentum” refers to a vector quantity. 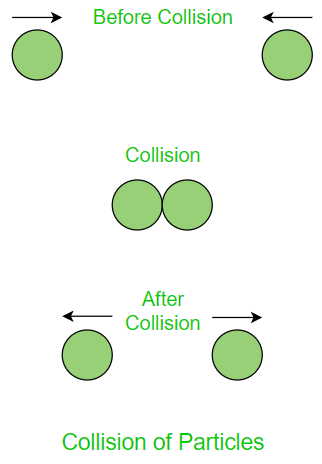 Conservation of Total Linear Momentum of a System of Particles

As a result, the parent nucleus’ mass will be m + M. Everything that happens in this situation is due to an internal force rather than an external force.If Fext = 0, we may conclude that dP ⁄ dt = 0.

With velocities, v and V, two bodies of mass m and M are travelling in opposing directions. We must determine the system’s velocity if they collide and move together after the impact.

Momentum will be conserved since there is no external force acting on the system of two bodies.

We can simply calculate the system’s final velocity using this equation.

Problem1: Two balls of equal masses are thrown upwards along the same vertical line at an interval of 3 seconds with the same initial velocity of 44.1 m s−1. Find the total time of flight of each ball, if they collide at a certain height, and the collision is perfectly inelastic.

When the particles collide the height of both particles will be same,

By solving the quadratic equation in t we get the time of first collision to be 6 s.

Now by momentum conservation, velocity of particles after collision:

Now, assume time taken for collision with ground be t1

Problem 2: Give few practical applications of the law of conservation of linear momentum?

Few applications of conservation of linear momentum is listed below:

Problem 3: A compressed spring binds two unequal weights together. When the cord is burnt by a matchstick, the spring is released, what quantity of the two masses flying apart will be equal?

Two unequal masses are first joined by a compressed spring. The cord is then burned with a matchstick, and the spring is released, causing the two masses to separate and acquire velocities that are inversely proportional to their masses, resulting in equal momentum.

Problem 4: Consider two skaters who began at a rest and then pushed off against each other on ice with reduced friction. The woman weighs 45 kg, whereas the man weighs 60 kg. The woman is moving away at a speed of 4 m ⁄ s. What is man’s recoil velocity?

According to law of conservation of momentum,

The negative sign shows that the man will move in opposite direction to the woman.

Problem 5: What is the condition for a system’s momentum to be conserved?