Question 1. Prove that the line of centres of two intersecting circles subtends equal angles at the two points of intersection.

Given: Two circles with Centre A and B circle intersects at C and D. 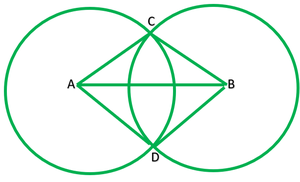 Question 2. Two chords AB and CD of lengths 5 cm and 11 cm respectively of a circle are parallel to each other and are on opposite sides of its centre. If the distance between AB and CD is 6 cm, find the radius of the circle.

Let O be the centre of circle and be r cm

Putting value of x in equation 1 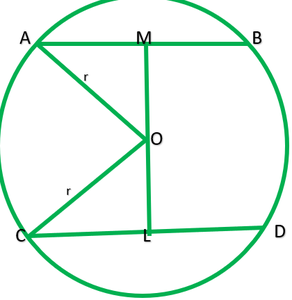 Question 3. The lengths of two parallel chords of a circle are 6 cm and 8 cm. If the smaller chord is at distance 4 cm from the center, what is the distance of the other chord from the centre?

Let AB and CD are|| chord of circle with centre O which AB=6cm and CD=8cm and radius of circle =r cm.

P is midpoint of AB.

M is midpoint of AB.

∴Therefore distance of the other chord from the centre is 3cm 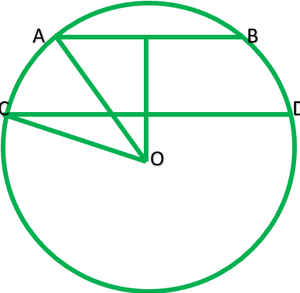 Question 4. Let the vertex of an angle ABC be located outside a circle and let the sides of the angle intersect equal chords AD and CE with the circle. Prove that ∠ABC is equal to half the difference of the angles subtended by the chords AC and DE at the centre.

Give: Vertex B of ∆ABC lie outside the circle,chord AD=CE

Solution: Chord DE subtends ∠DOE at the center and ∠DAE at point A on the circle.

chords AC subtends ∠AOC at the centre and ∠AEC at point

In ∆ ABE,∠DAE is exterior angle 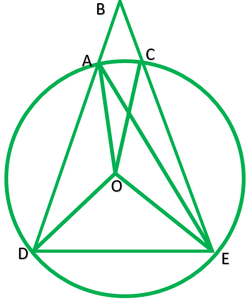 Question 5. Prove that the circle drawn with any side of a rhombus as diameter, passes through the point of intersection of its diagonals.

Given: A rhombus ABCD in which O is intersecting point of diagonals AC and BD.

A circle is drawn taking CD as diameter.

To prove: circle points through O or Lies on the circles.

O lies on the circle. 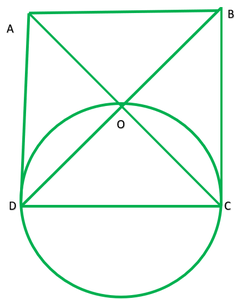 Question 6. ABCD is a parallelogram. The circle through A, B and C intersect CD (produced if necessary) at E. Prove that AE = AD.

ABCD is a ||gm. The  circle through A,B and C intersect at E. 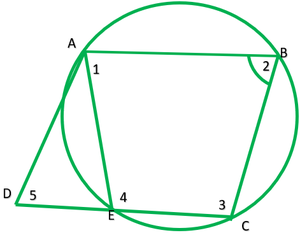 Question 7. AC and BD are chords of a circle which bisect each other. Prove that (i) AC and BD are diameters, (ii) ABCD is a rectangle.

Given: Two chords AC and BD bisects each other i.e OA=OC,OB=OD

To prove: In ∆AOB and COB

Since, ABCD  is cyclic quadrilateral

∴ ∠A  and ∠B lies in a semicircle

→ AC and BD are diameter of circle.

∴ ABCD is a rectangle. 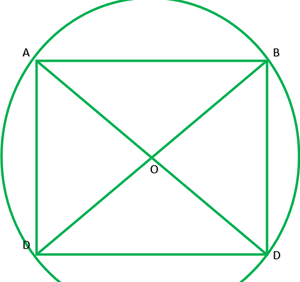 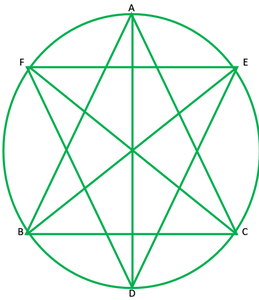 Question 9. Two congruent circles intersect each other at points A and B. Through A any line segment PAQ is drawn so that P, Q lie on the two circles. Prove that BP = BQ.

Given: two congruent circles which intersect at A and B.

PAB is a line segment

Proof: AB is a common chord of both the congruent circle.

Segment of both circles will be equal 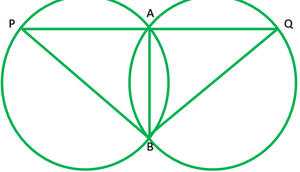 To prove: D lies on circumcircle.

Proof: Since BC subtends ∠BAC at A on the remaining of the circle.

This is possible only if BD is chord of the circle.

D lies on the circle. 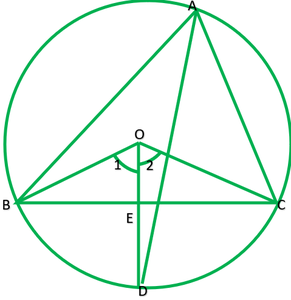