The Services is a function or an object that avails or limit to the application in AngularJS, ie., it is used to create variables/data that can be shared and can be used outside the component in which it is defined. Service facilitates built-in service or can make our own service. The Service can only be used inside the controller if it is defined as a dependency. In the case of many Services, the object that can be utilized, which is defined in DOM already, has few constraints in the AngularJS application.

Why to use the AngularJS Service?

AngularJS supervise the application constantly. In order to handle the events or any changes in a proper manner, then the Service that is provided by the AngularJS will prefer to use, instead of Javascript Objects. For instance, the window.location object that is that already defined in the DOM, can be used with some limitations, likewise the $location service, in the AngularJS application. For this case, AngularJS generally prefer to use the $location service, instead of using the window.location object.

There are some commonly used built-in services, are described below:

STEP 1: Creating a service will follow the below command:

STEP 2: After the service is created, we have to include it in the providers of app.module.ts

Here, the first letter of the service-name should be capitalized followed by Service written without any space.

STEP 3: So we have to now make changes in service-name.service.ts to create a JSON variable that is supposed to be made available to various components

The sailors variable here is an array.

import the service among the rest of the required imports. Example:

just like the way we did it in providers.

Create a variable of any type: newData without mentioning any type.

In the constructor define a property of the Service type

STEP 5: In app.component.html we will print the data stored in newData:

Note: As we have added ngFor in app.component.html we will have to import FormsModule in app.module.ts

Example: This example describes the basic usage of the Services in angularJS. 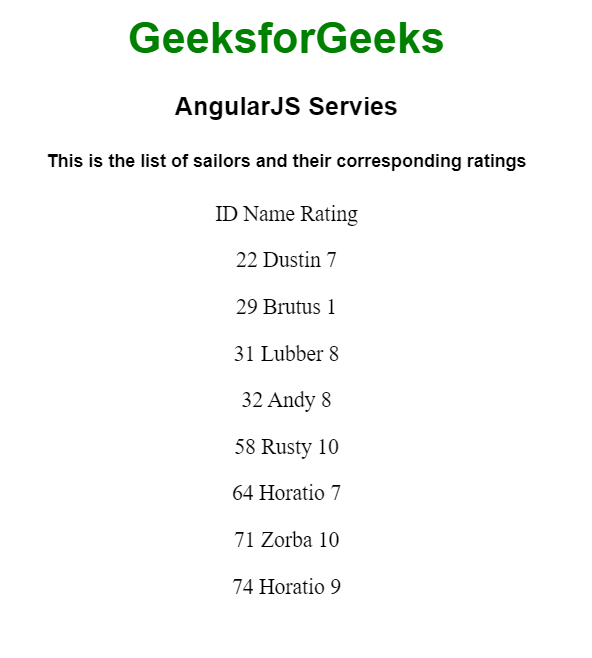