EIGRP has port No. 88 that runs on top of IP and is thus defined as a Transport Layer Protocol. BGP, Telnet, FTP, and other application-layer protocols lack a built-in reliability mechanism and rely on TCP (Protocol No. 6) at the Transport layer to ensure reliability. Hello, Update, Query, Reply, and ACK are the five types of EIGRP packets.

IP packets are used by EIGRP to convey routing information. IP packets with the Protocol Number field value 88 (0x58) in the IP header enclose EIGRP packets. EIGRP Packets which are holding the routing control information i.e. Reply, Update & Query are not delivered on regular basis, each trustworthy packet is allocated a sequence number, and an explicit acknowledgment is needed for that sequence number.

EIGRP has its dependability mechanism for acknowledging the receipt of its various sorts of packets, and it uses RTP to deliver or exchange packets between neighbors in a guaranteed and orderly manner.

When connecting with other EIGRP routers, EIGRP will use five different packets, which are as follows:

Before establishing adjacency, this method is used to find a neighbor. EIGRP Hellos are multicast messages with a 0 acknowledgment number. Before sharing EIGRP updates, EIGRP routers must establish neighbor associations.

The purpose of the hello message is to:

Used to transmit the converged routes used by a certain router. When a new route is identified or while convergence is complete (the route becomes passive), EIGRP Updates are transmitted as multicasts; when syncing topology tables with neighbors during EIGRP startup, they are sent as unicasts. They are reliably sent across EIGRP routers.

The topology table and routing table are built by sending update messages between neighbors. The OSPF neighbor router uses Update Message to share their prefix with their neighbor. Multicast and Unicast update messages are both possible. The update message on the serial connection is Unicast.

The Ethernet link, on the other hand, can be both Multicast and Unicast. Update Message’s opcode is 1. It also has an Autonomous Number in it. RTP (Reliable Transport Protocol) was utilized in update messages to ensure packet reliability. Update Message makes use of the Sequence and Acknowledgement Numbers.

When DUAL is re-computing a route in which the router does not have a viable successor, it will ask additional EIGRP neighbors for a possible successor. EIGRP Queries are reliably sent as multicasts. Query Packets are delivered when a successor route fails and there is no viable successor in the EIGRP topology database, as the name implies. The Router that has lost the route sends a query message to their neighbor to see if the route is still present in their topology table. In Query Message, you can also set the maximum delay period. When using a serial link, it is always Unicast and when using an Ethernet link, it is always Multicast.

An EIGRP Acknowledgment (ACK) packet is nothing more than an empty EIGRP Hello packet. EIGRP uses acknowledgment packets to ensure that EIGRP packets are delivered reliably. ACKs are always transmitted to a Unicast address, not the EIGRP Multicast group address, which is the source address of the sender of the reliable packet. Acknowledgment packets will also always have a non-zero acknowledgment number. Because the ACK is effectively simply a Hello with no information, it utilizes the same OPCode as the Hello Packet. The OPCode for this item is 5.

All EIGRP-enabled interfaces receive Hello packets from an EIGRP router. 224.0.0.10 is the EIGRP multicast address. Only other routers in the same autonomous system can create neighbor connections (adjacencies) with an EIGRP router.

On LANs, EIGRP hello packets are transmitted every 5 seconds as well as point-to-point links and multipoint circuits having a bandwidth larger than T1 also these hello packets are to be sent every 60 seconds on low-speed interfaces or T1. The HELLO interval is been configured by an interface subcommand ip hello-interval eigrp {as-num} {sec} for an EIGRP routing procedure on a network interface.

The neighbor adjacency is terminated if an EIGRP packet is not received before the hold time interval ends, the topology table entries learned from the neighbor are erased, and an update stating that the routes are unreachable is sent out. If for any destination network, the neighbor is a successor then from the routing table those networks will be deleted and DUAL is used to recalculate alternate paths. 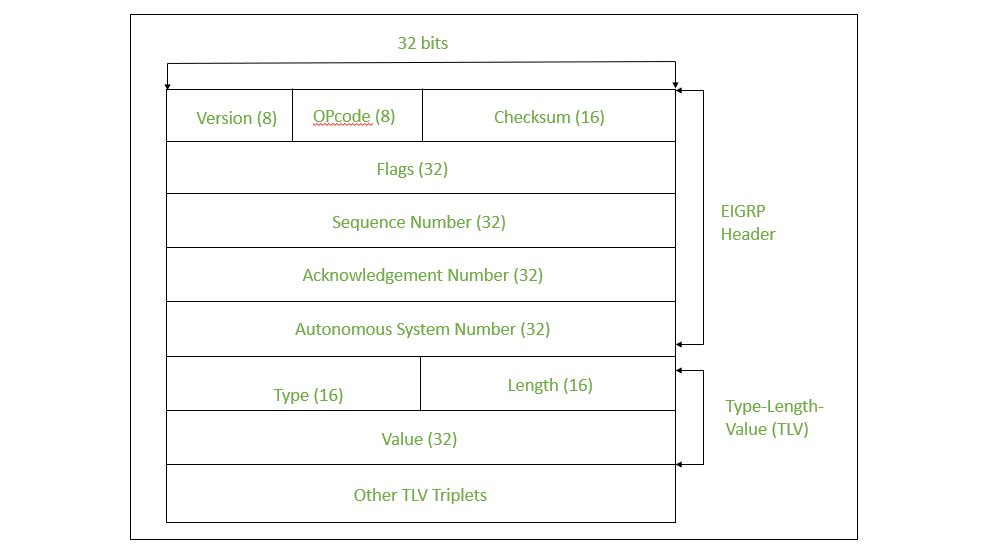 The fields in the EIGRP header are as follows :

Version: The EIGRP process version is identified by this value. Version 2 of the EIGRP is currently in use.

Opcode: Update (0x01), Query (0x03), Reply (0x04), and Hello (0x05) are the different types of EIGRP packets (0x05). The TLVs that follow the EIGRP header is determined by it. Hello, packets with a non-zero ACK number are known as ACKs. Opcode specifies one of the following EIGRP packet types:

Checksum: The full EIGRP packet’s checksum, except the IP header.

SEQ & ACK: RTP uses this to ensure that EIGRP messages are reliably exchanged.

AS number: An EIGRP packet’s autonomous system is identified. Only EIGRP packets inside an EIGRP domain are processed by an EIGRP process (same AS number)

Type: In the Value field, it specifies the type of information.

Length: specifies the overall length (This is the whole TLV in EIGRP).

Value: It contains the original information.

Internal EIGRP routes are those that originate from the same EIGRP autonomous system as the receiving router.

The following information is contained in the EIGRP IP Internal Route TLV : 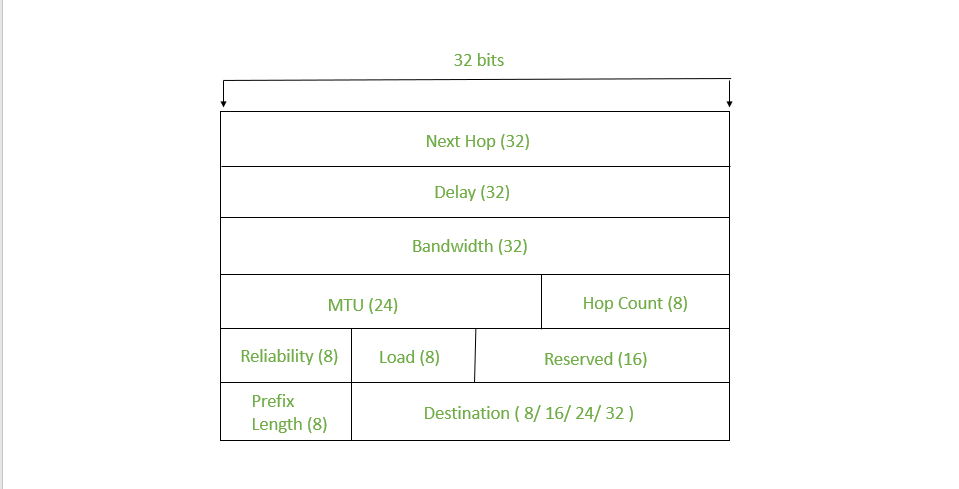 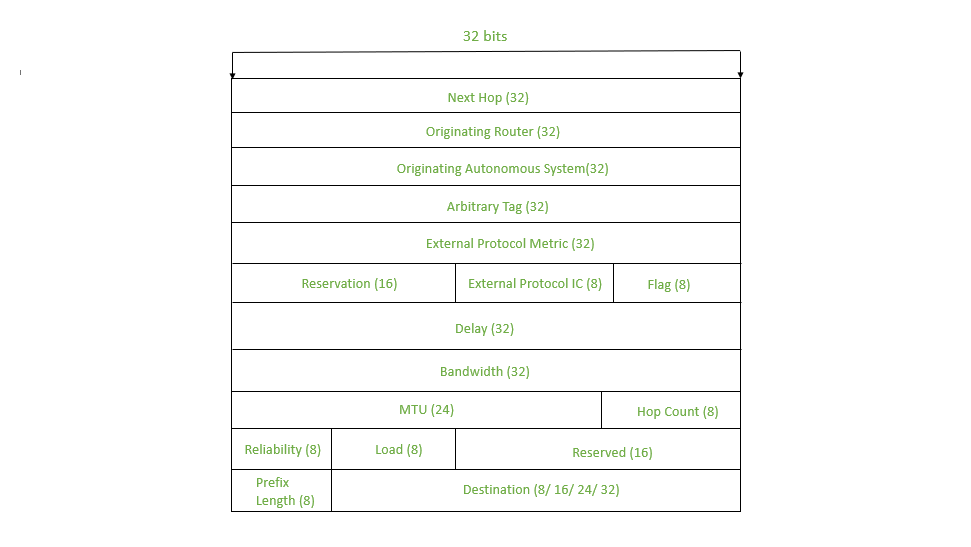 The information regarding the source (router and routing protocol) from which an external route is formed is specified in the Originating Router, Originating AS, External Protocol Metric, and External Protocol ID fields. Here we need to know that in OSI-based contexts, the Inter-Domain Routing Protocol (IDRP) is equivalent to the Border Gateway Protocol (BGP) in TCP/IP environments. IDRP is not supported by Cisco IOS software. 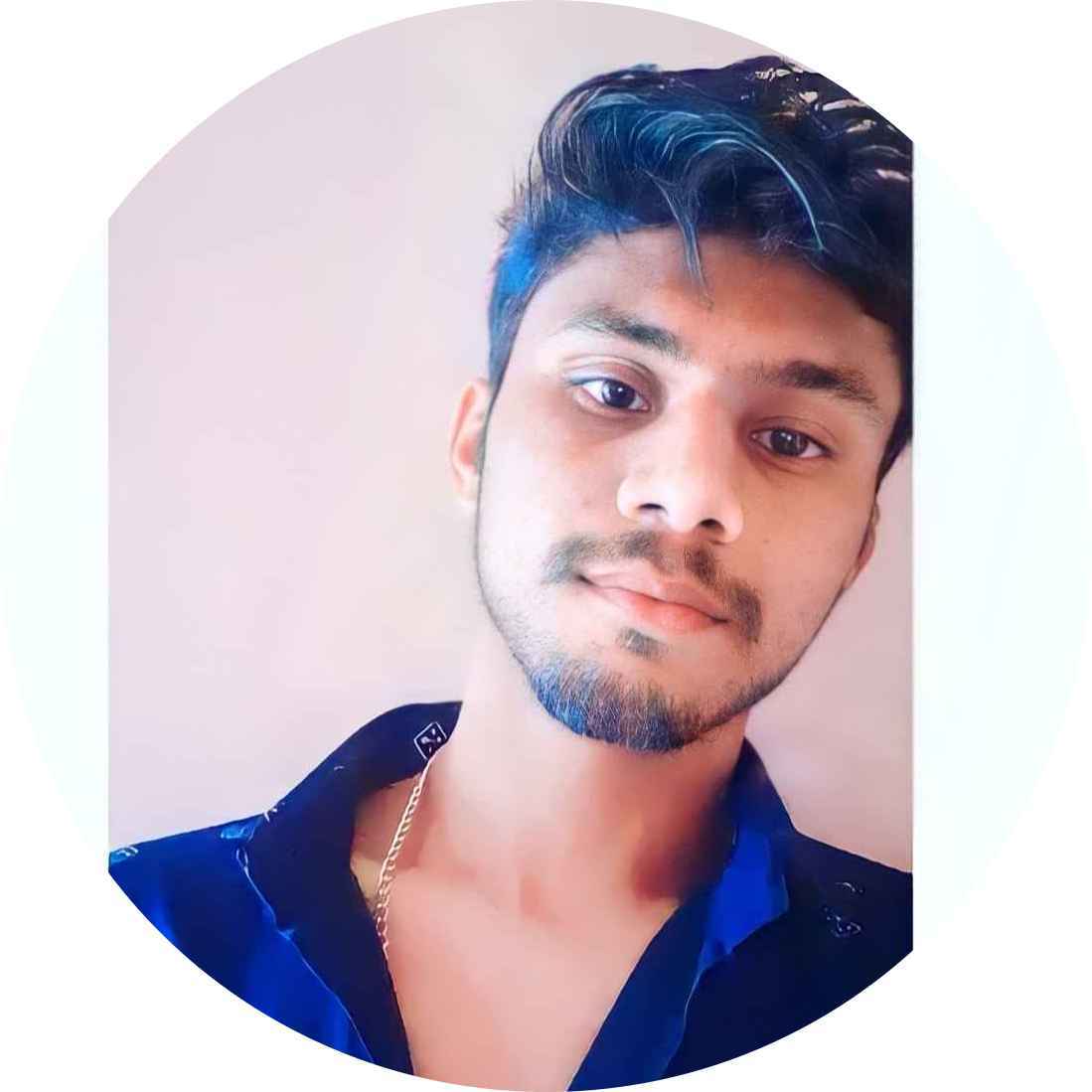