OSPF is abbreviated as Open Shortest Path First. OSPF is an intradomain routing protocol and it is the implementation of link state routing protocol.It falls into the group of interior gateway protocols (IGPs), operating within a single autonomous system (AS). OSPF was designed as an interior gateway protocol. It is used in an autonomous system such as a local area network (LAN). 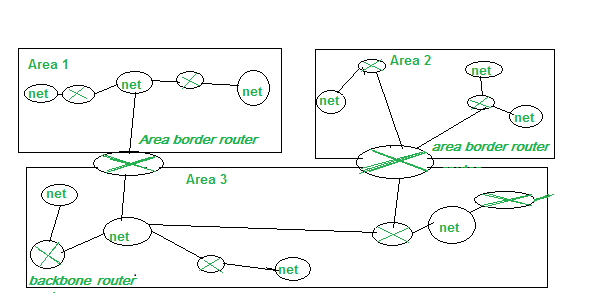 From the above given figure we can see that the network is divided and it can be structured, or subdivided, into routing areas to simplify administration and optimize traffic and resource utilization. Routers within an area flood the area with routing information. At the border of areas there lies a special router “area border routers”. These routers summarizes the information about the area in which it lies and send the information to some other area. Among the areas there is an area called “backbone” to which all the other areas are connected and serves as the primary area. Each area has an identification. Two different areas can’t be connected directly but they need to be connected through the backbone network and it is compulsory. The routers which are at the border of two area for example area 1 and area 3 are connected through is area border router.

The OSPF protocol supports authentication and its updates are sent through multicast address 224.0.0.5/6. If one of the link fails the protocol finds the other shortest path to reach the destination hence it posses faster convergence.While communication hello packets are sent over each 10 sec, and when the reply is not received within 40 sec it is considered time out. Also when there is slight change in the router configuration (routers added/removed ), the routing table is updated very fast. It is based on link state routing protocol.

As the name suggested “shortest path first”, OSPF calculate the shortest route to a destination through the network based on an algorithm. It uses disjktra algorithm for calculating shortest path.

A connection is also known as link. A link can also be connection between two routers/networks. In OSPF four different types of links are defined:

There are five different types of packet in the OSPF protocol and they are:

When there comes a situation of passing a packet, the question is to which network it should be passed and why?
The decision is based on optimisation. One of the way is to assign a cost for passing through a network and this cost is termed as metric. However the metric assigned to each network depends on the type of protocol. Protocol such as OSPF allows the administrator to assign a cost for passing through a network based on the type of service. It can be based on maximum delays, maximum throughput, speed and error free etc. There can be several routing tables based on different types of services.